From the beginning of VALORANT’s closed beta, Japan has shined the brightest alongside the giants of North America and Europe. A region that was not at the top of any mainstream esports, such as Counter-Strike: Global Offensive or League of Legends, took the scene by storm and showcased to everyone that they have a lot of talented players available and are ready for international competition.

After many weeks, ZETA DIVISION is still holding onto the top spot in the Japanese rankings, but now others have a perfect opportunity to prove themselves against the best of the best. The Japanese edition of First Strike opens with VALORANT FIRST STRIKE JAPAN Powered by RAGE.

The event, similar to all the other competitions around the world, will feature two Open Qualifiers that will allow aspiring competitors, who are at least Diamond 1, to advance to the Regional Finals and fight for their share of a ¥5,000,000 JPY (~$47,842 USD) prize pool. The qualifying events will be hosted on November 14th-15th, and one week after that on November 21st-22nd, 2020. Registration is now open and will be closed on November 5th, 2020 at 11:59 PM JST. 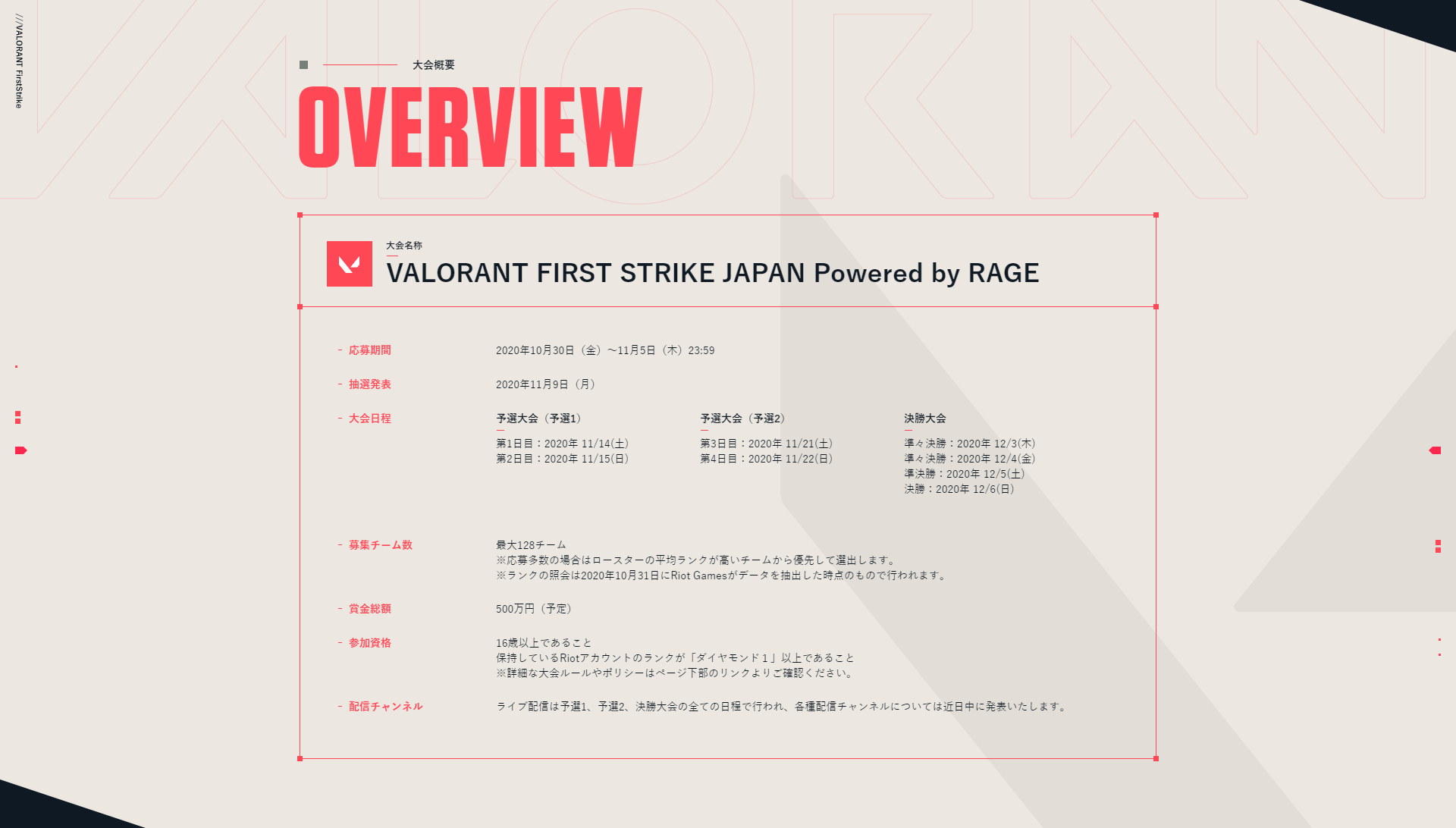 The maximum number of teams allowed to participate in the Open Qualifier is 128. These teams will be later divided into four single-elimination brackets with 32 teams each. Up until the final match, all of the games will be played in a best-of-1 format. The final games, which will determine who is advancing to the Regional Finals, will have the best-of-3 format.

VALORANT FIRST STRIKE JAPAN Powered by RAGE will also introduce seeding. Thanks to that, the four runner’s up from the first qualifier, will be given top seedings in the second qualifier to reward their performance the first time around.

The goal of seeding is also to avoid the leading teams in Japan facing each other in the early stages of the competition. The organizers already announced the 12 teams that are invited to take part in the Open Qualifier. The teams are: BlackBird Ignis, Crazy Raccoon, CYCLOPS athlete gaming, DetonatioN Gaming, DeToNator, FAV gaming, ZETA DIVISION, Lag Gaming, REJECT, SCARZ, Sengoku Gaming and SunSister Rapid.

The final eight teams from both qualifiers (4 from each) will meet in the best-of-3 Regional Finals between December 3rd and 6th, 2020, with Japan’s next champions being crowned with the title after the best-of-5 game on the final day.

The broadcast will be available for all stages of the competition: the first and the second qualifier, and the Regional Finals. The details will be announced later via the social media channels of VALORANT Japan.

Do you think we might see another team being victorious during Japan’s First Strike? Or it will be just another occasion for Absolute JUPITER to highlight their dominance in the region? Whoever will eventually come up the top, we can be confident about one thing: the upcoming competition, in the often underestimated region, will surely deliver a lot of exciting action and matchups.