We, players, might rarely think about it, but how much time do we spend just by waiting in queue or for people to select an Agent? For VALORANT, queues are not that long, it usually takes a few seconds or minutes to find a game, but the Agent selection screen lasts a whole 90 seconds. After that, the first round of the game or half-time round (pistol rounds) has another 45-60 seconds wait time before we get into the action. It’s in total about 3 minutes just to get into the first round of the game.

It might not sound like a lot, but when you play 5 games per day, in the worst-case scenario about 15 minutes just goes to waste. There is a simple solution to reduce that wait time with the “accept/decline” button after a match is found. Queue times in VALORANT are still pretty quick. It all depends on the rank, game mode, or simply the hour people are playing. Occasionally, while waiting in the queue, something just comes up and that thing takes way longer than the player predicted. In the meantime, the match gets found and teammates need to wait 90 seconds just to be thrown back to the main menu and queue again. This solution is very popular in a lot of games: CS:GO, League of Legends, Dota2, or even MMORPG games like Final Fantasy XIV Online, but not VALORANT, at least not yet.

Not all games are using this system and not all were using it from the start. Back in the days, League of Legends also didn’t have the “accept/decline” button and queues were longer than they are today. More than that, games were not getting canceled when a player failed to select a champion - instead players were getting a random champion which sounds pretty goofy by today’s standards. Imagine going away just to get a bottle of water and walking back to your computer just to see you are already in-game as a champion you never played as before. On the other hand, some games don’t use this system at all. Overwatch is over 3 years old now and still doesn’t use this feature. With DPS queues that can last even about 20 minutes, it results from time to time in a game getting canceled, because one of DPS players probably just fell asleep while waiting for the game and failed to select a hero. 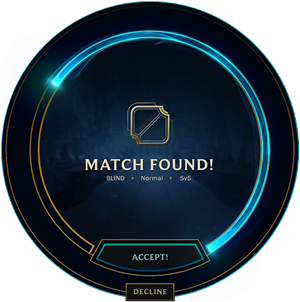 Accept Button in League of Legends

Back to VALORANT, although waiting 90 seconds when somebody doesn’t pick an Agent might not seem like a lot, when it happens a few times per day, it starts to get frustrating. It’s really surprising that there is no feature like this in the game, since Riot Games for sure know how important it was in League of Legends, but we hope that they are already working on it. There is also a matter of bad timing like when a friend wants to join the lobby and at the same time a match is found. With the “ready check” system players could get a second chance to invite somebody instead of dodging the game that also results in a few minutes to few hours “ban” preventing them from queueing up again. All 9 other players are also losing a collective time of 14 minutes, which could be prevented with a simple “decline” button. Sometimes stuff just pops out of thin air and players should be allowed to leave the queue even when a game is just found.

Long story short, when you click on that “Find game” button, make sure that you are actually ready to play the game. Do you also think that VALORANT needs a feature like this? Or maybe you don’t mind waiting a few additional minutes? Let us know in the comments!

NANA
I really hope they add such a button. I'm often queueing solo then getting a message from a friend if I want to play together but then the match is found and I can't even decline it :(
2020-07-02 09:42
Michael
This would be great, especially for those times where you have to get into 5 match lobbies in a row where someone is AFK to not pick something... You are forced to wait a few minutes for nothing.