Epulze Valorant Prodigies has continued and on June 13th and 14th, the last two groups, C & D, were played. We now have the eight teams that will be participating in the playoffs. The bracket can be found on our events page and you can also see the summary of groups A & B in the previously released article.

In Group C, StartedFromCS leads the group with a perfect score (3-0) and 27 rounds in favor; PartyParrots got second place (2-1) with a loss against StartedFromCS in a close match. Despite expectations for Ninjas in Pyjamas (1-2) and ForZe (0-3), they did not perform well in this group.

In Group D Prodigy took the lead (3-0) and second place went to 2G4L (2-1); with a third-place for Fabriken (1-2), which was decided in the last match played against 2G4L, and finally Royals (0-3) in the last place. Although these results looked similar to those of group C; looking at the games in detail the story was different. Prodigy was forced to play the third map twice, being able to close both series in their favor. The story was different for Fabriken, who also had to play their third map twice (once against Prodigy and once against 2G4L) but could not close either of these in their favor ending up not passing through from the Group. 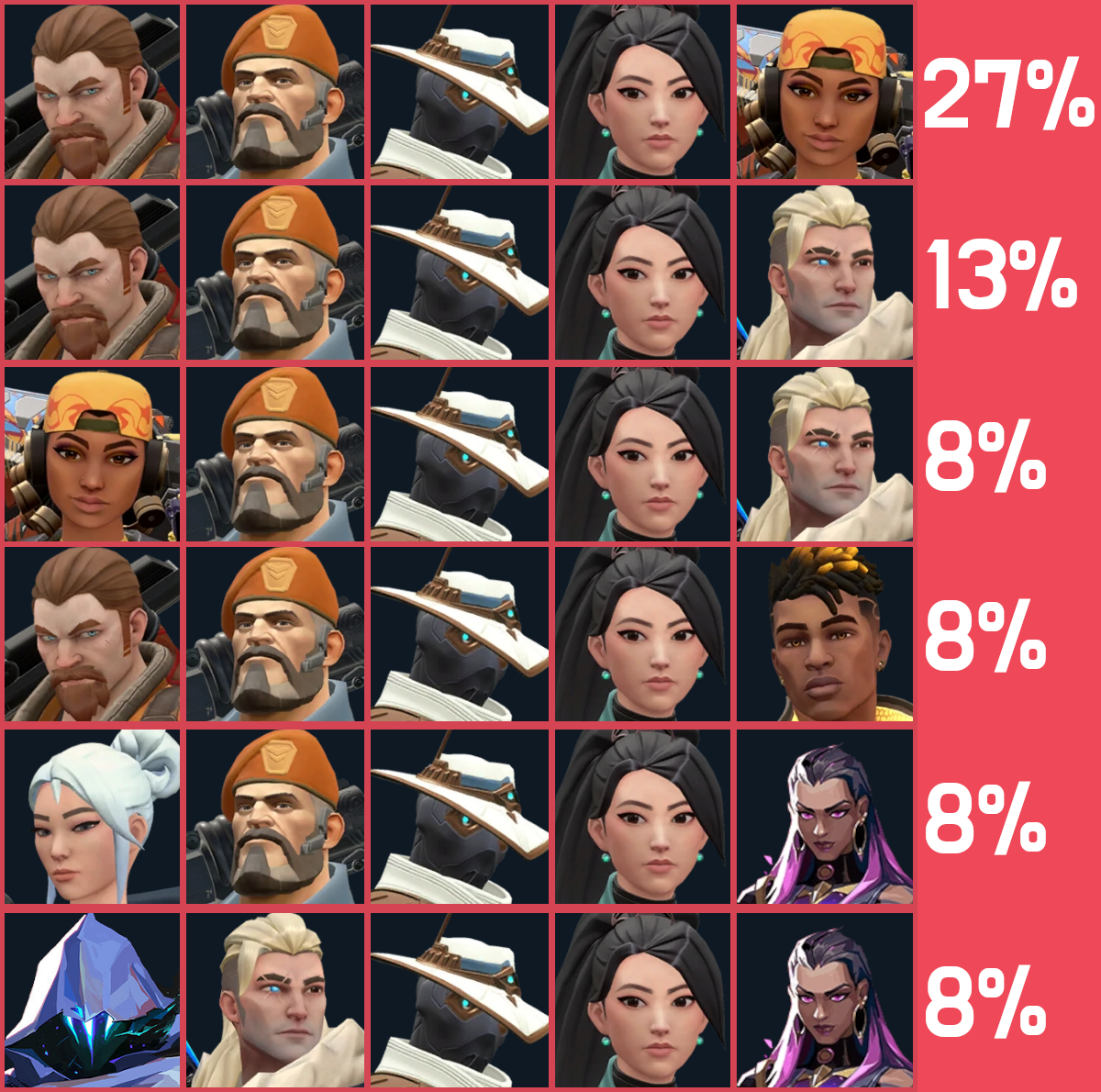 Breach, Brimstone, Cypher, Sage was the core for this group, something similar to what most teams prefer. Raze, as usual in Europe, remains solid as the fifth Agent to complement this core.

Analyzing a little bit the choice of agent lineups have:

They played Bind once and they lost on that map.

PartyParrots played only two compositions, one for Split: Breach, Brimstone, Cypher, Raze, Sage and for the rest of the maps changed to Raze for Sova

Prodigy used a total of five compositions in which the most used was Brimstone, Cypher, Jett, Reyna, Sage. The other four compositions were only used once:

They used Brimstone, Cypher, Jett, Reyna, Sage a total of four times in the group stage. Their two lost maps (Haven and Bind) were played using this composition.

2G4L presented a different style of play, with Breach, Brimstone, Cypher, Raze, and Sage. They played the same composition on all maps every time, favoring team play and synergy between these Agents over the ability to adapt to different maps.

On June 27th and 28th, the quarterfinals will kick off. Teams coming from different versions of the game will cross paths. While Group A & B played during the Closed Beta, with one less map, and without Reyna, Group C & D had to adapt to these new challenges. We'll see who gets to win and gets the championship title under their belt!