Since yesterday the community has been gossiping about the upcoming changes to the game with Patch 1.11. The developers shared the full information today, with a lot of changes coming to the majors that we see the most in the competitive games, that's one they are done ahead of the First Strike Championship. The characters that will change the most with the upcoming patch are Breach, Cypher and Killjoy. Besides that, the new hero Skye will be available in the game, together with the new map, Icebox being now added to the competitive rotation. The other changes feature economy rules update, ranked mode adjustments, and the long-awaited left-handed view model. 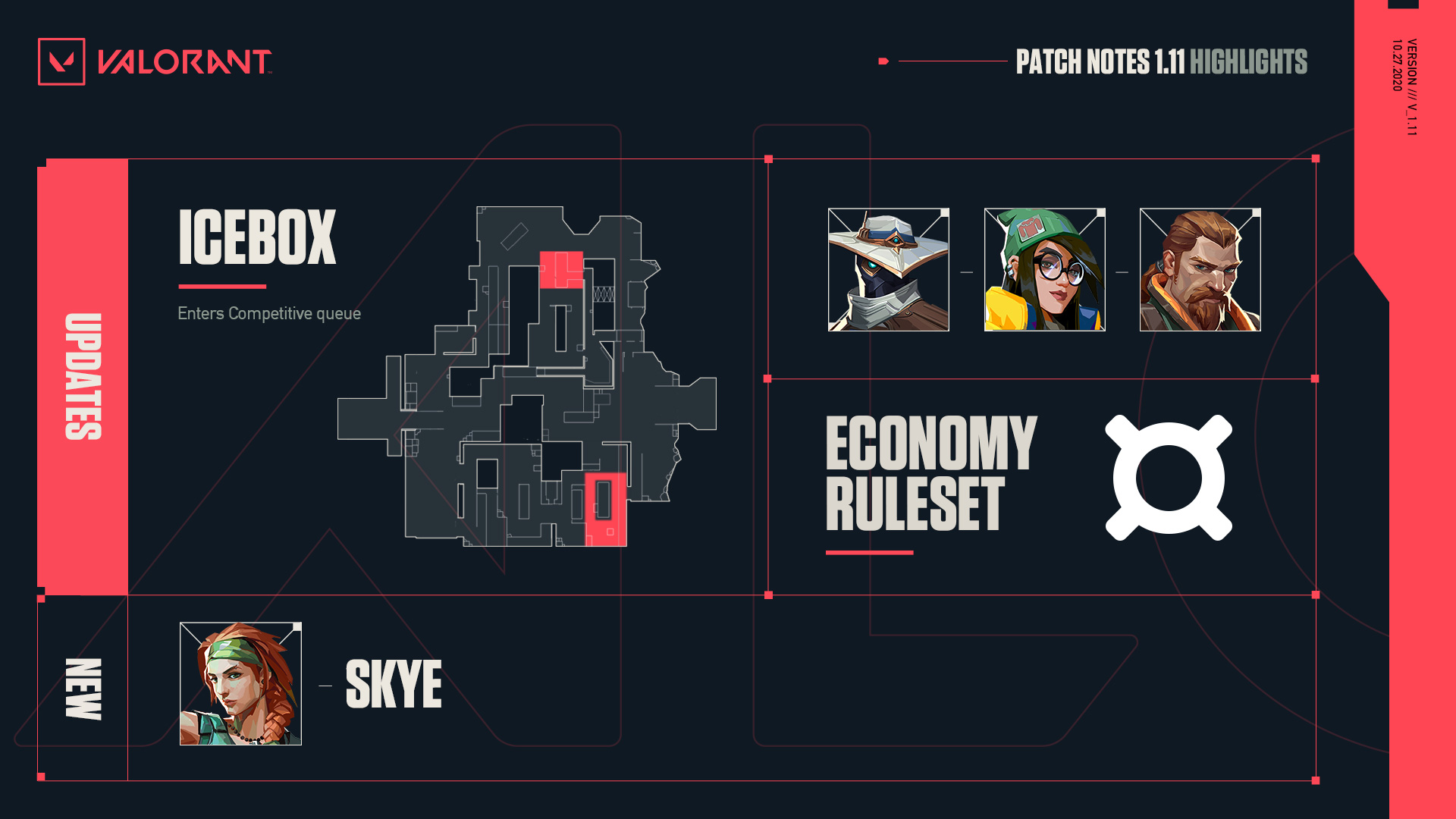 With First Strike on the horizon, the balance team has been hard at work making our last round of major balance changes before teams start duking it out. We want to ensure that the top teams don’t have to constantly adapt to a changing game while they’re playing in the tournament. Minor balance changes may occur during the span of First Strike, but we won’t deploy changes like the ones in this patch that heavily impact a team’s strategies.

One of the trends we have observed is that attacking teams can have a really hard time breaking entrenched defenders. Although every piece of the game can influence this type of trend (move speed, weapon tuning, map design, Agent balance), we think there are a few targeted character changes that can help give attackers more opportunities to break entrenched defenders. Each is listed below.

Flash Tuning: The fade out of the flash debuff remains the same duration but now fades slower at the start

Initiators create concentrated windows of extremely high threat to help their teams break onto sites. To this end, we are slightly increasing the duration of debuffs from some Initiator abilities (mostly flashes). Our goal here is to increase the opportunity window that Initiator’s teammates have to capitalize on their utility and further differentiate Initiators from Duelists.

Similar to some of the changes we made with Sage, we want to increase the depth of decision making when playing Sentinels while also providing enemies with more counterplay to “trap” abilities. To reduce the total potential impact of these abilities, autonomous traps are now disabled when the deployer dies (e.g., Cypher’s Trapwire disables when Cypher dies). We want to encourage Sentinel players to play more thoughtfully and carefully around their traps while increasing the reward for taking out the Sentinel player.

Killjoy is most effective when locking down a single site. Killjoy has to stay near her Turret and Alarmbot for them to remain active. Her global recon should be hit pretty hard here but we have slightly boosted her stalling power to counterbalance that nerf. All in all, we hope to keep Killjoy in a very similar place power wise but give her a stronger identity as the premiere on-site defender.

Play Out All Rounds makes it easier to run practice sessions. When enabled the game will no longer end when a team reaches 13 wins; instead the match will continue until both teams have played a full half of 12 rounds on each side. After 24 rounds the team with more rounds will win. In the case of a tie the game will proceed to overtime (dependent on the Overtime option selected in the lobby screen).

Context: These changes are intended to increase richness in decision making regarding when it is worthwhile to save your gear vs. go for the round win. Additionally, this will allow teams that can secure round wins to more effectively chip away at the economy of opponents that opt to save out expensive weapons on a round loss. 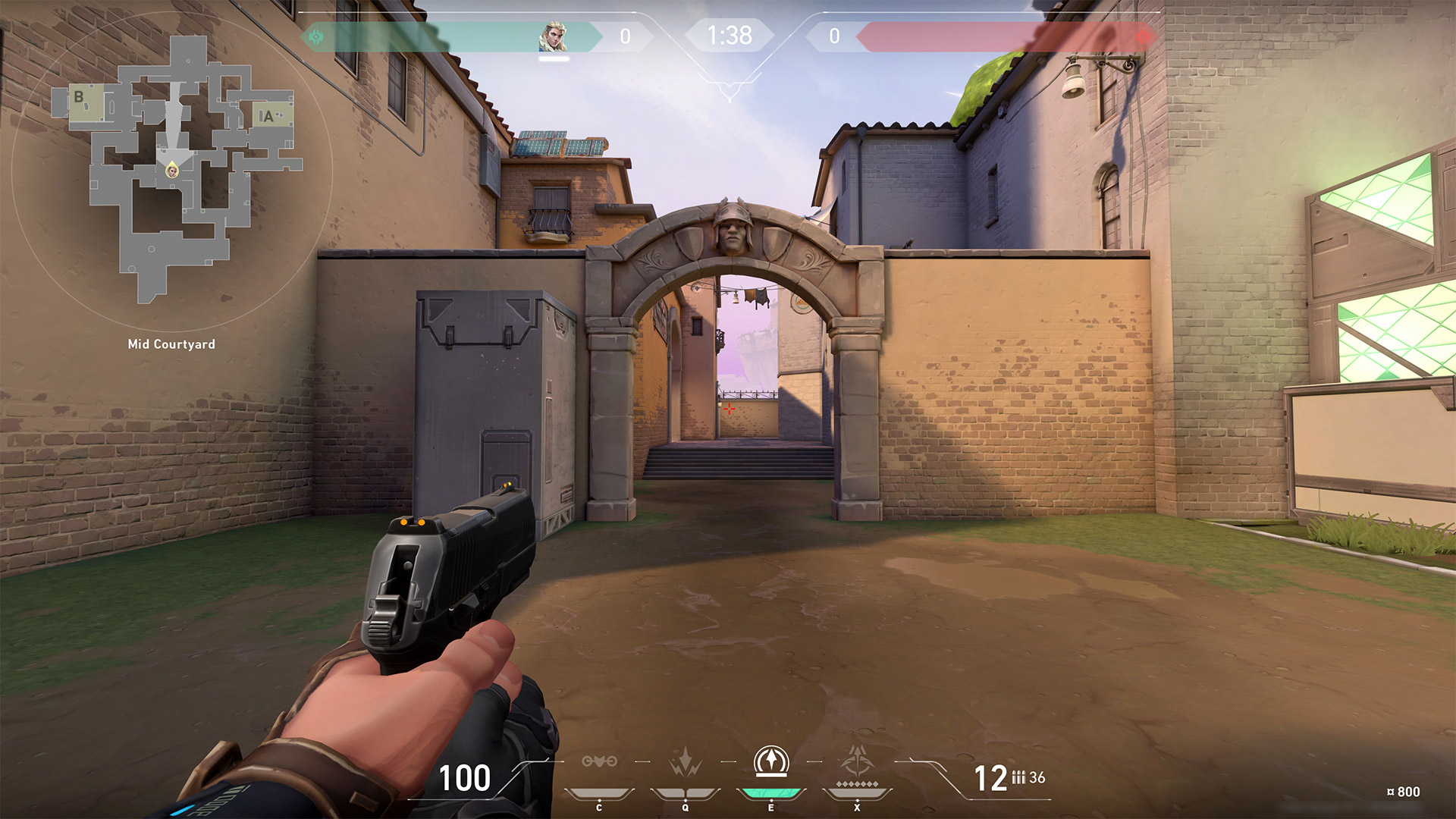 This graphics setting accidentally shipped with the last patch, and we were going to remove it, but your feedback asked us to keep it. So It stays, but with some more tuned defaults. We don’t know when we’ll get to optimizing its performance, or tune it further, so consider it an ongoing Beta.