Raze: Don't mess with this baiana!

Since her release in the closed beta, Raze has been a controversial agent. The first complaints arose due to her huge ability to do damage. Even though she was not the only character who could do damage with her abilities, that all her abilities fulfilled this task awoke quite a lot of anger from a certain part of the community. The first complaints were about her ultimate, Showstopper, and in the first weeks we saw countless clips of teams being eliminated by this ultimate. This was in addition to the potential of the Paint Shells which, in the beta, with their two charges were extremely annoying on certain maps.

Reviewing Raze's history and the balance changes she had we can find that:

During the closed beta (patch 0.47), VALORANT’s balance team limited the amount of Paint Shells available from 2 to 1 and modified how her skill replenished.

But that wasn't all, in patch 0.50 they increased the cost of Blast Packs from 100 to 200 Creds, and finally, in the official release 1.0, they changed the area of effect of Blast Packs from 2 meters to 1 meter. In addition to that, in the newest patch 1.04, the cost of Showstopper changed from 6 to 7 Ult points. After Sage, she is the character that has suffered the most nerfs since she appeared in the game.

In my personal opinion, Raze’s potential is not only in her ability to do damage. All her skills can be used with multiple intentions and this is where Raze becomes an interesting agent. That's why I want to analyze one by one Raze's abilities and how they compare to other agents' abilities:

Paint Shells: Paint shells have high damage, being one of the few skills that can take the life of a rival agent if they don't react quickly. They can be used in several ways: Similar to Aftershock, forcing the enemy to move from their current position, or used aggressively to cover the rotation through a corridor or even to clear a site of Trap Wires before entering. 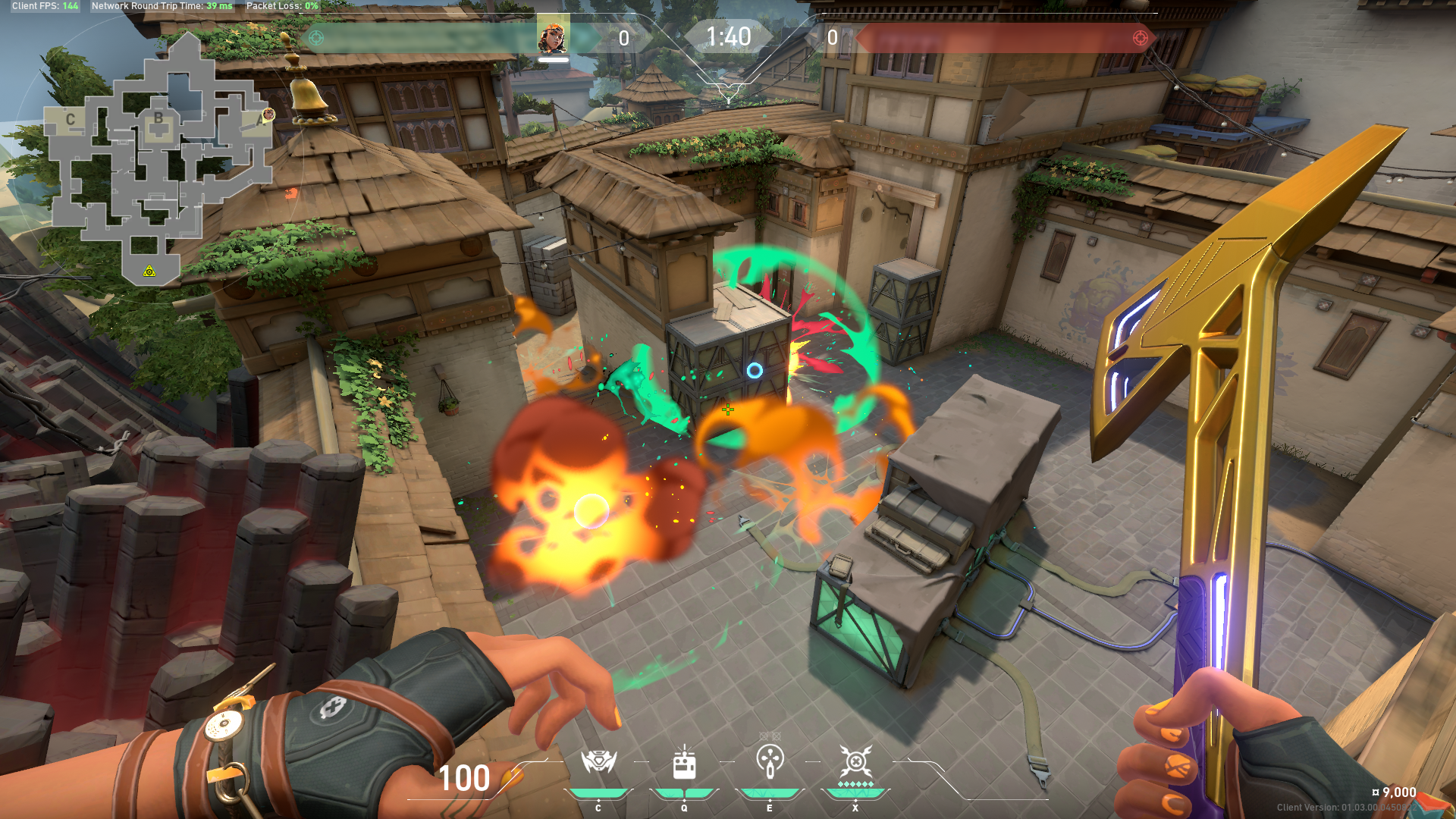 Paint Shell for clearing trap wires on Haven A site

Blast Pack: I think this is the most flexible ability of all. It has potential to do damage in a corner when it’s known or suspected that someone might be there. Also, it gives the ability to move vertically, like Jett's Updraft, but also allows us to move faster horizontally in a similar way to Tailwind. They are not exactly the same, there are many times when Jett's skills, due to how they are activated, the response time, and the cost they have, are more efficient to perform certain tasks. It should not be forgotten that this is a single skill that does three things: damage, vertical displacement and horizontal displacement.

Boom Bot: In spite of being less flexible than the previous abilities, it has an interesting functionality. It works as a remote scout tool and has the potential to do damage. It can work like the Owl Drone, enabling advancement through areas where it’s not feasible to check every corner. It gives less information than the Owl Drone, but it can enable you and there is always the potential to do damage.

Showstopper: Finally, her ultimate is the least flexible ability from her kit. Its functionality is straightforward, damage to the enemy team in an area of effect. Over time, players have learned to avoid the moments where this ultimate gets multiple casualties, although Raze players try to be creative and get the most out of it.

Teams slowly began to use Raze more flexibly and in addition to being a source of damage she became a key element in ruling out places where an opposing agent could hide or use their Blast Packs and Paint Shells to clean up a Trap Wires site. Bind was the first map where Raze became popular, with several closed spaces where Paint Shells or Blast Packs can get the necessary casualties to enter a bomb site. Raze was winning the place as the fifth agent of the team, especially in Europe, and although the core composition was changing, Raze found a place in the meta thanks to her flexibility, mainly in Bind and Ascent.

In summary Raze has skills that can work in various ways, perhaps not as efficiently as other agents for a particular task, but flexibility is extremely valuable in VALORANT.