This report will be a little different than what I normally do. I usually choose the tournaments within the report to try to represent the meta with the most important representatives of VALORANT. Last weekend the Mandatory.GG Cup was played, a single-elimination tournament with 128 teams, you can see the recap here. The tournament had several particularities, among them there was no Pick and Bans system in the maps in the first rounds, generating a quite big disproportion between the played maps. The idea of this report is to make a general analysis, which gives us a perspective of which are the Tier 1 / Tier 2 choices in the competitive meta and then separate the information from the quarterfinals, where the matches became Bo3. 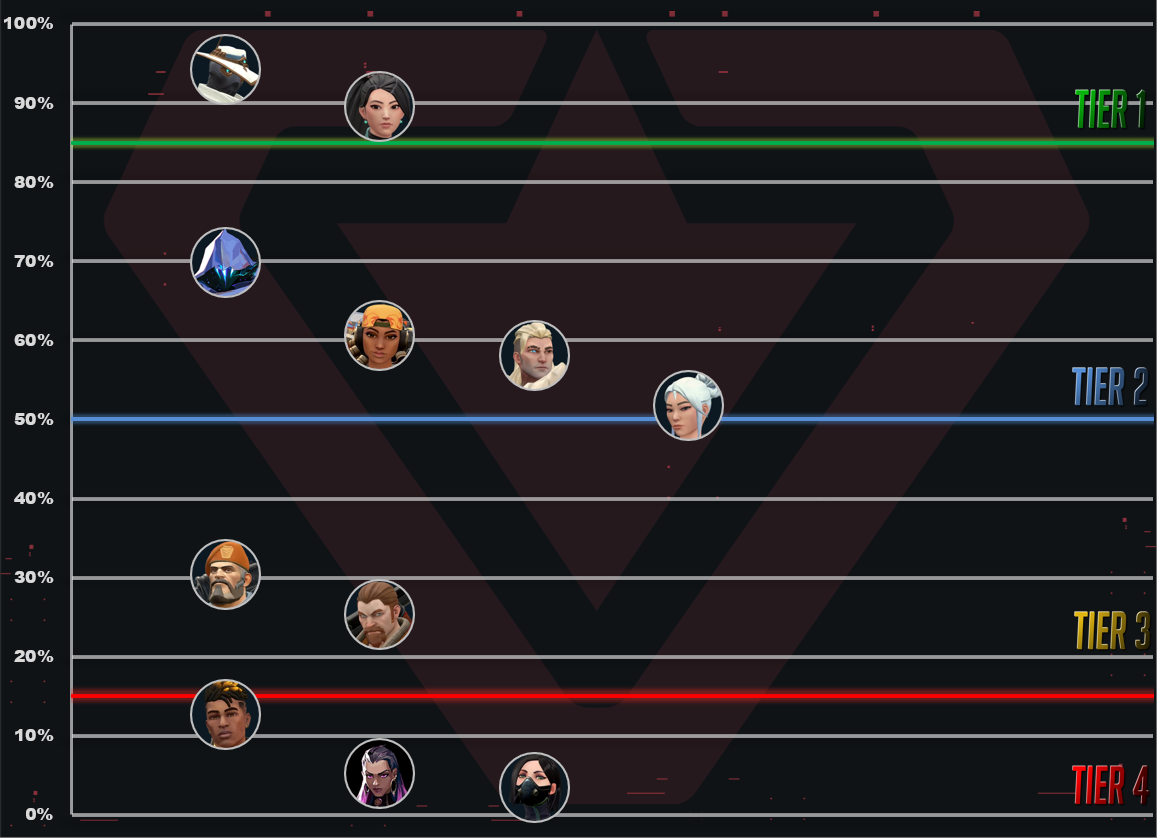 Omen (70%) leads Tier 2 as the favorite smoker. Raze (61%) has her highest pick rate in a long time, this is partly due to the distribution of maps played. Sova (58%) is still a solid choice but the surprise comes from Jett (52%) who reached Tier 2 in this tournament.

Brimstone (30%) had a rather low usage compared to what we are used to. Breach (25%) is generally much more popular in Europe than in North America.

Although Phoenix (13%) is a recurring option in North America, Europe decides to do without it. Reyna (5%) and Viper (3%) are marginal options, even in this type of tournament with so many teams.

It is important to note that due to the format of the tournament the distribution of maps is mainly due to the maps played in each round:

The most interesting thing to highlight: Unlike North America where they are using Sage-less compositions on Ascent, in the European region this takes place on Haven. Another trend that is expanding week by week is which Smoker is used; Omen has taken control as the favorite smoker, while Brimstone is increasingly relegated to Bind. Sova continues to be popular on Ascent, Bind and Haven, but on Split his pick rate is practically zero. Jett and Raze are flexible options, when the teams have to choose according to the map, Jett is the first choice for Ascent and Haven, while Raze is for Bind and Split. Breach was more frequent on Split. For Phoenix, he doesn't have great variations in his pick rate, Bind and Haven are a little above their overall pick rate, but not too much. Reyna and Viper are still very marginal options.

In this graph you can notice which was the most used composition: Cypher, Sage, Omen, Sova, Jett. These five picks are dominant over the rest of the agents, in the rest of the agents we see how their pick rates decrease notably in the quarterfinals. Viper and Reyna were never chosen, Brimstone and Breach did not reach the 15% barrier. Raze drops as well, which is partly due to a lower proportion of Bind played since the quarterfinals. Omen, Sova and Jett raise their pick rate notably and set themselves up as the options the teams chose to define this tournament.

Analyzing the compositions of the finalists

They used only one composition throughout the tournament: Cypher, Jett, Omen, Sage, Sova. This information is from three maps, Haven, Ascent and Bind. Historically in Split they usually changed Sova to Raze. This identifies G2 as a team with a very strong core focused on getting the most out of the agents and not varying their compositions so much on the different maps. This gives them certain advantages, such as the level of confidence in each agent and the synergy they create between the different agents, but it takes away some flexibility.

The story with Bonk is different, one of the main characteristics of Bonk is one of the few teams that decide to leave Sage out of all the maps except Ascent. And unlike G2 they have a composition for each map:

About Split: There are only registers of one game played, so Viper may not be a standard for Bonk. The rest of the maps were played several times and they kept those compositions per map. It is interesting to see how one of the few teams that does not use Sage managed to make it to the finals with a very good overall performance.

Normally I do the usage analysis in the different reports now, but this particular report does not meet the conditions I had set for the previous ones. I will be trying to make reports for the different regions, given the current conditions it is very difficult to compare meta and game styles that do not interact. For the next edition we'll have Killjoy among us (probably with a slightly inflated pick rate because she's the newest one) and we'll analyze how the meta will be affected and what place she can take in the universe of the competitive VALORANT. Her skills look interesting, but I prefer not to make any predictions until I see how efficient they really are.

Zillons
viper, reyna still very very low
2020-08-05 07:40
RkT
The situation of Viper is very complicated, the gameplay style of the teams and her kit is not compatible. Players like Mixwell tried to make it work, but it wasn't quite efficient. (Besides, Mixwell is an excellent Operator player and, at least I feel, it's not the most beneficial weapon for Viper)
2020-08-05 08:51