Which Smoke ability is the best in VALORANT?

There are a few vision blocking abilities in VALORANT and only three Agents (Breach, Sova, and Raze) do not possess any means to block the line of sight of the opponent. The rest of the Agents have some tool to block the vision in some way. In this article, we will compare all of the smoke abilities and we will check which one of them is the best.

Looking at those abilities in detail: 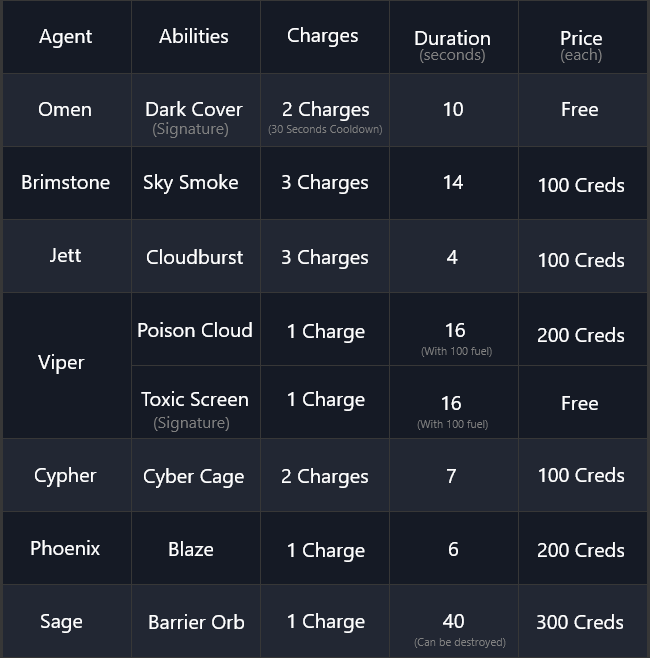 Side note: If Viper’s Poison Cloud + Toxic Screen are activated at the same time they last 10 seconds (non-linear fuel consumption).

What can we do with this information?

With this data available we can (try to) obtain the theoretical efficiency of the Agents to block the line of sight of your enemies. Again, this is a potential of what can be used, as it is just a method for making the comparison. During the in-game situations there are differences that go beyond how much space and how long any of these abilities last. For example, Brimstone has the possibility to deploy his Sky Smokes in several positions simultaneously from a safe spot (even with a great range allowing him to do bait in another site). I also made the examples by taking the maximum total time of the round (2:09), which benefits characters with cooldown abilities while avoiding overlapping skills (trying to maximize the time of the line of sight blocked).

Before we start, here are the raw numbers used for analysis:

Omen: Dark Cover provides 10 seconds of vision blocking and has two charges at the start of the round. Its 30 seconds of cooldown allows him to have a maximum of 3 more charges before the end of the round and one more charge if the Spike is planted after 1:30 thus obtaining 6 total charges. If only one Dark Cover is used at a time, 60 seconds of activated Dark Cover can be obtained (43% of the maximum round time).

Brimstone: Sky Smoke has 3 charges and each one lasts 14 seconds. If activated without overlapping, we have a total of 42 seconds of Sky Smoke (20% of the maximum round time).

Jett: Cloudburst has 3 charges that last 4 seconds, obtaining a maximum of 12 seconds of vision blocking (6% of the total round time).

Cypher: Has two Cyber Cage charges and each charge lasts 7 seconds, generating a total of 14 seconds of vision blocking (7% of total round time).

Viper: It's a little more complex with its fuel system. Poison Cloud and Toxic Screen (considering that only one is active at a time) last the same amount of time with 100 fuel, 16 seconds. The time it takes to recharge the entire fuel tank is 20 seconds and we start the round with 50 seconds of fuel. This makes up approximately 96 seconds of maximum activated Poison Cloud or Toxic Screen time (with only one activated at a time). This gives us 46% of the total time of the round.

Phoenix: Blaze is a wall a little different from the other smokes. With a single charge and 6 seconds of duration.

Sage: With her Barrier Orb, we can block vision for a maximum of 40 seconds (It can be destroyed).

Another interesting factor is the area of effect of the ability and what the smoke looks like inside. 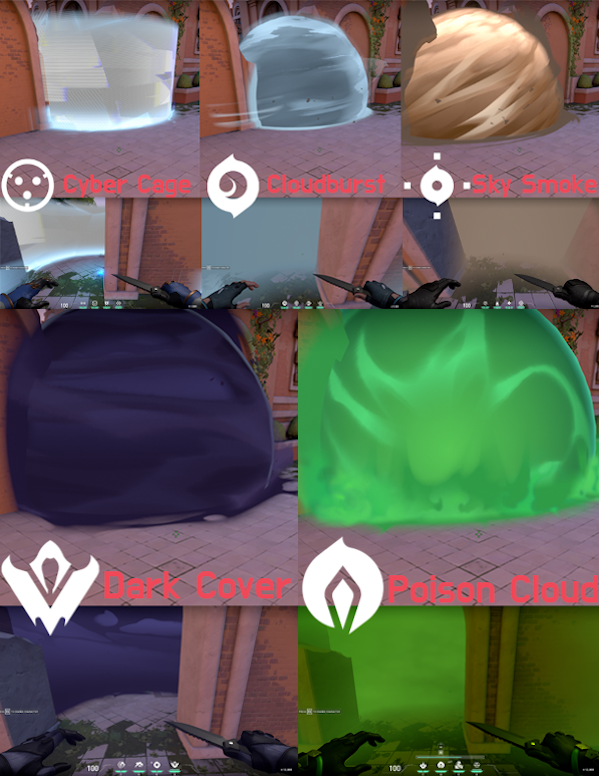 Starting from smallest we have Jett, Cypher and Brimstone followed by Omen and Viper

Cyber Cage expands up and down, resulting in its total length being much larger than what we normally see when used on the ground. 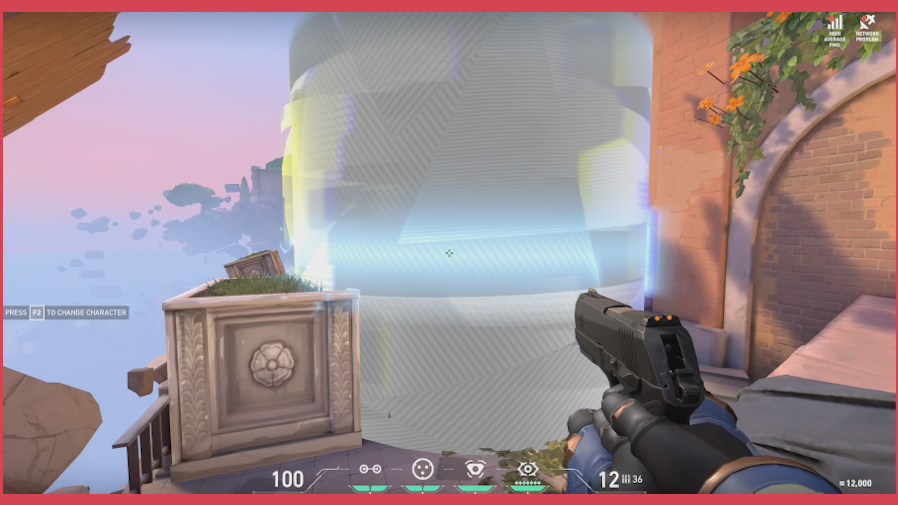 The different abilities and how they fit together with each Agent gives us diversity in abilities that at first, we can assume to be similar. brimstone's sky smoke is efficient and easy to use, it can be used from a safe position. Omen's Dark Cover has a good area, and by having cooldown, allows us to have some Dark Cover available at any time during the round. Poison Cloud has the largest area and works with fuel, but it is more difficult to reposition this ability and you can only have one. Cloudburst is more selfish and is quick, but a short tool for blocking sight; this fits with Jett's abilities. Cyber Cage exposes the top, which has good synergy with the camera if it is located high up.

Finding out how to use these abilities will work together in different compositions as well as how they will function on each map highlights the intricate design behind each Agent in VALORANT.