The favourites heading into the tournament were of course Absolute JUPITER, the region’s reigning Ignition Series champions and their most dominant team, Lag Gaming, the last RAGE tournament’s finalists, and SCARZ, who improved massively since the last tournament and recently beat Absolute JUPITER at another tournament, as seen in our interview with SCARZ’ marin. In addition, big organizations like Nora-Rengo and Sunsister were also fielding rosters.

As expected, Absolute JUPITER, Lag, and SCARZ all reached the semifinals, joined by Blackbird Ignis, formerly Ignis, one of the region’s best CS:GO teams. In fact, all of these rosters were longtime CS:GO rivals, setting up very exciting storylines for these pivotal matches. Other large organizations, such as Nora-Rengo, Sunsister, and DetonatioN, did not fare as well, falling before this stage of the tournament.

Absolute JUPITER took down Blackbird Ignis in the first semifinal, 13-7 on Split. Oshiro "Reita" Ryu put up 358 ACS on the map, while Shogo "takej" Takemori and Kouji "Laz" Ushida each put up single digit deaths. Yusuke "neth" Matsuda was far and away Blackbird’s best on Raze, with 17/13/2 KDA, but it was not enough to overcome the Japanese titans.

SCARZ played Lag in the next semifinal, in a huge matchup to determine who would get the final shot at taking down JUPITER. The up-and-coming SCARZ took it 13-9 on Bind. This match was statistically closer as well, with Souta "sakurai" Sakurai performing much the same role as nethydra for Blackbird and being the clear top fragger on his team. His 291 ACS actually led the whole lobby, but like nethydra, it wasn’t good enough. Ryota "ryota-" Okayama had a massive game on Sova, getting himself 12 assists, more than their Sage Akira "marin" Kato, due to his stellar information-gathering game. The only team yet proven to beat JUPITER would face them in the finals.

But it was not to happen again for SCARZ. They fell in 2 games in quick succession, 13-5, 13-5 on Haven and Split. Reita averaged a 320 ACS playing Jett all series, while his opponent, Sak, didn’t even reach 100 ACS on Haven after being consistently shut down. SCARZ were only ever able to snag a round or two at a time, making their economy consistently be in shambles. Eventually, Absolute JUPITER romped through the finals to make themselves Japan’s two-time champions and undisputed kings. 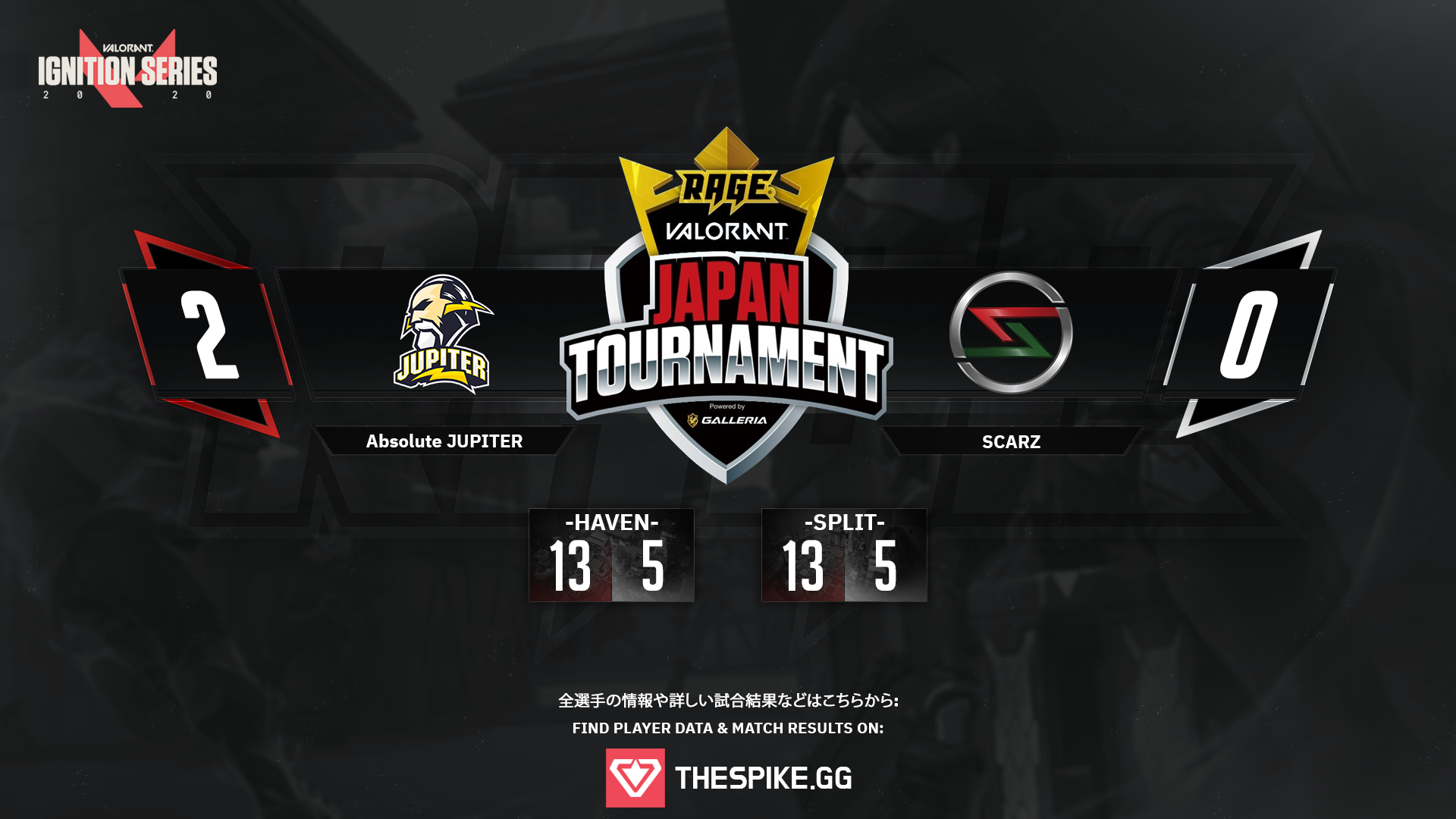