Sage players might rank up slower and here's why

Sage is one of the best (if not the best) agents in VALORANT right now. Her wall is great for buying time or preventing the enemy from rotating, slows make shooting enemies way easier and reveals where they are thanks to its sound cues, healing is an amazing utility since she can fully heal up anybody on the team, and having an ability to turn tables of the round with a resurrection is incomparable. You can read more about her abilities in our Sage Guide. All of this is forcing players to play her very safely, and that might prevent her mains from ranking up quickly.

She is, for now, the only support-like agent in VALORANT, which means that losing her early in the round can be crucial for the team. The best way to get the most value out of her is to just to play behind your allies, heal them up whenever they need it, and watch your team’s back for flankers to wall them off. That creates a problem for competitive players. The main factors on how fast players will rank are: kills, deaths, and damage dealt, on top of that early rounds are worth more than later ones. After a lot of games, win ratio also starts to be a major element. Unfortunately, Sage’s playstyle doesn’t allow players to play her like duelists or get a lot of value at the start of the game. It’s way easier to get a lot of kills or damage as Jett, Raze or Phoenix than a support agent. To overcome this, the game should take into consideration how many players on both sides were affected by her abilities. Did players get healed when her healing wasn’t on cooldown? How many players were blocked by her wall? Did her resurrection help the team to win a round? Measuring this kind of data not only would help her mains to rank up quicker, but would also distinguish a good Sage player from a bad one. 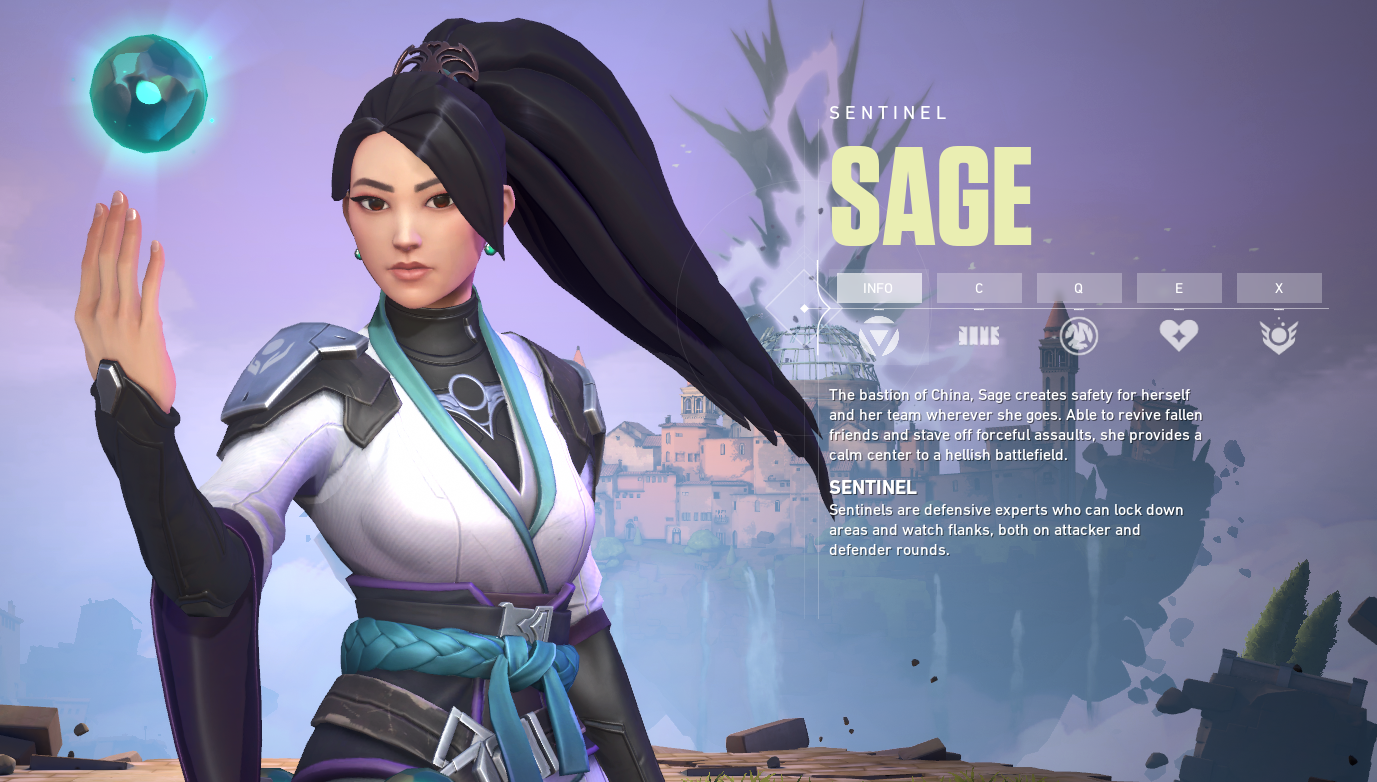 Of course, it doesn’t mean that Sage can’t be on the top of the scoreboard. Probably, we have all died to a flanking Sage with an Odin, however, by the game’s design, the top spots should be reserved for agents like Jett or Reyna. Lead Character Designer Ryan “Morello” Scott teased us recently, that the new agent will be “Sage-like”, so with new supports coming into the game, this problem will only expand. Early rounds are also having more impact than late rounds, and with Sage’s high abilities costs, it’s just hard to have good equipment to secure more kills. Making sure to have the wall every round is more important than having a Vandal or Phantom. Her kit also doesn’t help her to duel enemies at all. Phoenix or Reyna can blind to take an easy trade, Sova or Cypher can reveal enemies’ position, or Jett can jump from Narnia to surprise enemies with her kunais. With Sage, players mostly need to hope for a one-tap when they are left alone. In the end, it’s just way easier to get kills as a duelist than support, and KDA should not be the only thing that competitive system takes into consideration.

Lastly, as Viper or Cypher players can deny access to the site just by themselves, even if they die for it, enemies might use a lot of abilities and because of that, not be able to defend the spike back. With Sage, players can’t afford this since she should be last to die. Having an ability to heal your low health ally can not only turn the tables but also bait enemies when they call that target as “one HP”. There are also rounds where Sage players will not even see an enemy, but still will contribute with heal, slows or wall, but unfortunately, VALORANT doesn’t take those actions into account for now.

What do you think about competitive indicators? Should Riot Games change it, so Sage players or any future support agents mains will have a bit easier time ranking up? Or maybe you think that’s how it should be, since thanks to the support's abilities, duelists can carry the game? Leave your thoughts in the comments section below!

LVL
This is just spreading misinformation. Personal performance only matters in placements and maybe a couple of games after that. Then what matters most is round differential so winning 13-3 is better than winning 13-11.
2020-07-10 10:22
DT_RAW
was going to say the same. personal performance means WAY less than it did in the beta. I played in both beta and now and its significantly different. winning is the most important thing and almost the only thing after a few games from placements
2020-07-10 12:57