The Ignition Series arrived in North America with T1 x NSG Showdown and finally we had a tournament that combined invitations to the most recognized teams and open slots for all those who want to show that they are up to the challenge. In this edition of the Meta Report, we focused only on the North American region: the T1 x NSG Showdown was played with a format of 4 groups playing Bo3 and the best 2 teams of each group went to the playoffs. All this gave us a total of 74 maps to analyze.

If we look at the pick rate per agent we have 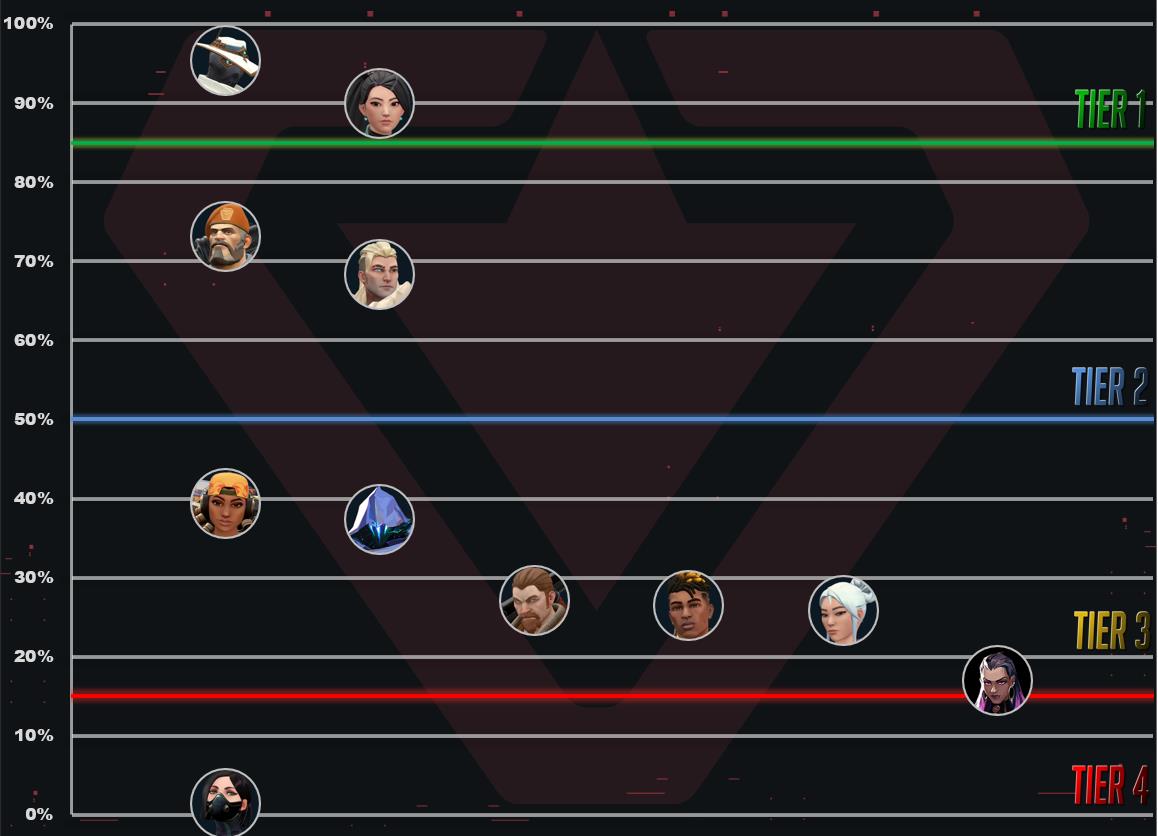 Cypher (95%) is the new favorite of the teams, in the last weeks his pick rate has been increasing, and for the first time, Sage (90%) loses her crown.

In Tier 3 we found the same agents as in the last Meta Report, but there were several changes in the positions of each one. Raze (39%) is still the most common option for completing compositions. The big winner of this report is Omen (37%) who increased his pick rate by 20% from the previous report. Breach (27%), despite his low pick rate, integrates into one of the most popular compositions. Phoenix (26%) and Jett (26%) had the same pick rate this week, being favored by the champion Team SoloMid, who used both agents regularly. Finally we find Reyna (17%) at the edge of Tier 3, her pick rate has dropped a lot from the previous report.

Despite the changes received, Viper (1%) cannot leave Tier 4. Some teams try to use her, mainly on Split, but she is still a marginal option.

Analyzing the pick rate per map:

Cypher and Sage were a must on every map. The interesting things start with Brimstone, Sova, Raze and Omen, the four agents had a significant preference on some of the maps over others.

Brimstone on Bind and Heaven, with the type of control that his smokes offer. This type of control is decreased on Ascent and Split by the design of the map and is where Omen has worked very well as a replacement.

Sova on Ascend and Bind, two open maps that give him a lot of angles to use his abilities. Raze on Bind and Split, where having the option of vertical displacement is important and where her offensive skills are very efficient.

Phoenix has no picks on Bind, the map design does not favor him, and Team SoloMid, the team that used him the most, never played Bind during the tournament.

Analyzing the most used compositions we have:

Brimstone, Cypher, Raze, Sage, and Sova is by far the most used composition. Out of the 31 times it was used, 27 were on Bind (87%), and it was used by 9 different teams. It is proving to be one of the standards on Bind.

We can analyze Breach, Brimstone, Cypher, Sage, Sova and Breach, Cypher, Omen, Sage, Sova together: They are two compositions that work in a similar way, but they change their main smoker, Brimstone for Omen. Omen is getting more popular week by week and is becoming a common choice among teams. Another interesting factor is Breach, who despite his low pick rate (27%) is present in two of the top 5 compositions.

Brimstone, Cypher, Phoenix, Sage, Sova and Brimstone, Cypher, Jett, Reyna, Sage were popular choices on Haven, Phoenix and Sage can take advantage of Haven's design to capitalize on their abilities. Phoenix has many places to use his Curveball and the map height design allows Jett to surprise her rivals.

Bind was not chosen by Team SoloMid, so we couldn't see which composition they would have chosen to play on this map.

Like Team SoloMid, T1 chose to ban or avoid Bind as many times as possible.

The best results on Bind can be found in the third place: Immortals. They always used the same composition on this map: Brimstone, Cypher, Raze, Sage, Sova, the most popular composition of the tournament.

The graph shows the number of net rounds won or lost by a composition by map.

The top performing compositions on Ascent, Haven and Split were determined by Team SoloMid and T1, who performed well throughout the tournament. On Bind we can see the most popular composition of the tournament, Brimstone, Cypher, Raze, Sage, and Sova, with excellent results and showing why it is one of the favorite options for teams. This section will likely have changes, so if you are interested in any particular data of the teams do not hesitate to ask in the comments. 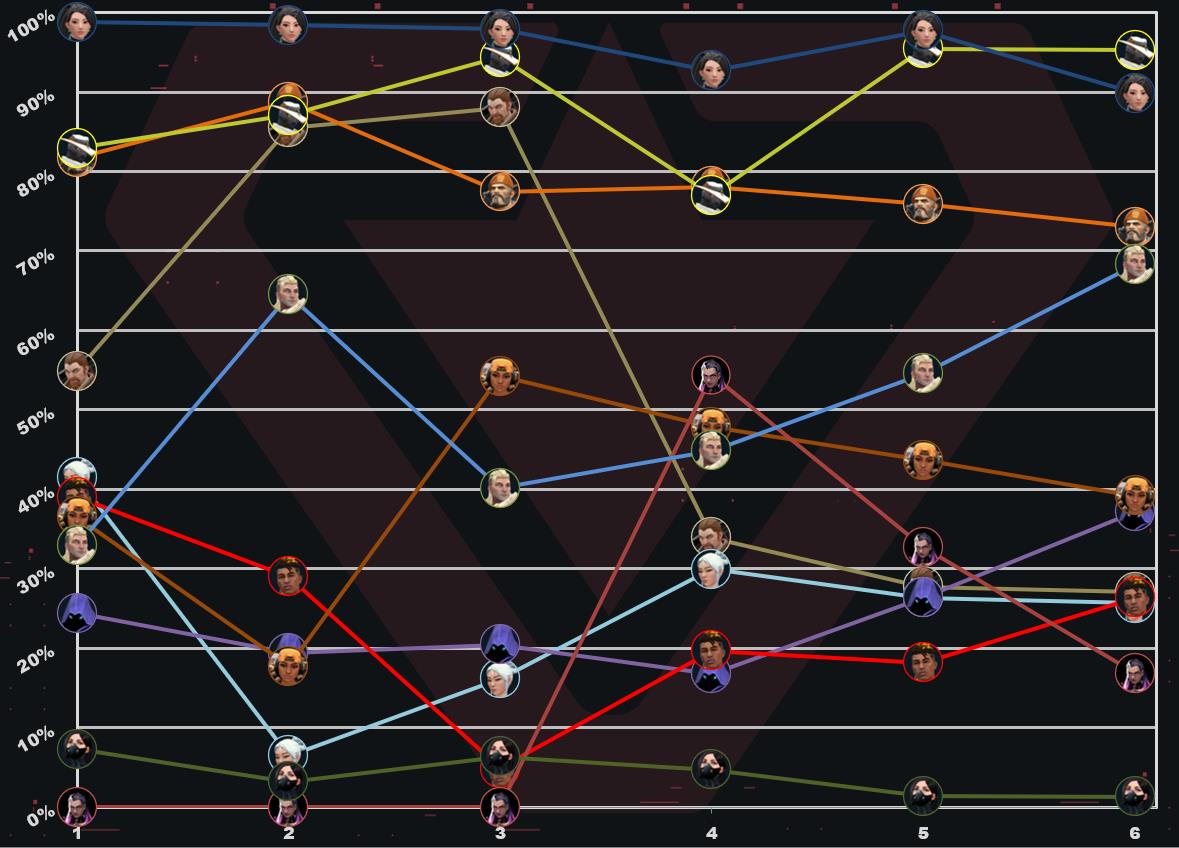 Sage and Cypher are still the top agents for teams. Team SoloMid showed us that it is possible to have good results on Ascent without using Sage, but we will have to wait to see if this playstyle can be adapted to other teams.

Brimstone, Breach, Raze and Jett remain at similar pick rate levels to the last report. There are a lot of teams that don't want to leave Brimstone out but, as we mentioned in the last report, Omen is growing in popularity. Unless double-smoker compositions become more popular, Brimstone's pick rate will continue to decline.

Sova was one of this week's winners and has been since we came out of beta. Ascent's design makes him a very strong option and week by week Ascent's popularity keeps rising, competing in this report with Bind and Haven pick rates.

Omen and Phoenix continue to grow, Phoenix was always used by Team SoloMid. It is interesting to see how compositions can be adapted to playstyles. Team SoloMid, with an aggressive and extremely efficient attacking playstyle, gets a lot out of agents like Jett and Phoenix.

All the pick rate that these agents raise has to come from somewhere, and in this report it comes from Reyna's pick rate, which after its peak in the Twitch Rivals tournament will not stop dropping. Even after the 1.02 patch changes, Viper couldn't get out of the deep end.

Tournaments like the T1 x NSG Showdown is what the competitive VALORANT ecosystem needs to grow healthy. Having invited teams, who had the best results in the tournament, and teams that make a slot through qualifiers, gives new talent a place to showcase their level. Team SoloMid proved that you can play without using Sage, it may not be possible in all maps but it opens the door to new playstyles and to other teams taking some risks in their compositions. T1, the other finalist, also used variations that we are used to; the change from Brimstone to Omen is something that several teams are trying. The results obtained by T1 are good enough to take into account this variation, at least on Ascent and Split.

This report provides information on North America and will be useful for future comparisons between regions. The improvements on THESPIKE.GG in team pages allows me to spend less time gathering the data and more time analyzing it. In the next editions I will try to add new variables to analyze the meta.

snackmuncher | snackmuncher
I was wondering if with these Meta Reports if we could get round win% attacker vs defender for all maps in the tournament
2020-07-09 12:29