Last weekend we had the PAX Arena VALORANT Invitational, featuring twenty teams distributed in four groups of five teams each. The best two teams from each group went to the quarterfinals, so we had one of the longest and most interesting tournaments to date. Expectations were high, with big names like TSM TSM

Spencer "Hiko" MartinNicholas "nitr0" CannellaJoshua "steel" NissanPeter "Asuna" MazurykEthan "Ethan" Arnold, among others, the PAX Arena Invitational promised to be a great event and it delivered. It is important to be aware that this report is only composed of games from the North American region, from now on I will try to cover the regions separately. With a total of 106 maps played the agent picks rates were as follows: 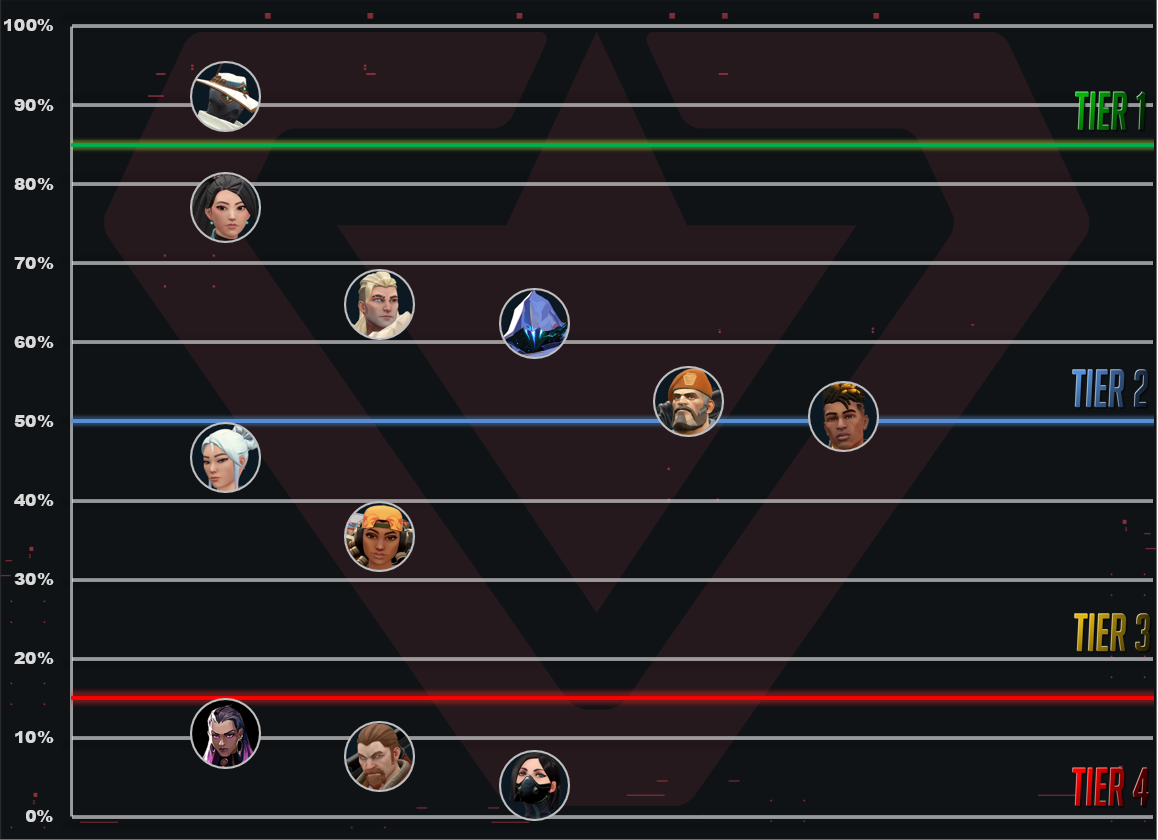 Only Cypher (91%) was able to stay in Tier 1, the map control and playing style of the teams seems not to want to leave him behind. His pick rate is down from previous reports, but we'll see that in detail later on.

I think we can say that we are at the most varied meta so far. We have Sage (77%) who in the last reports stopped being the favorite and now falls to Tier 2. Sova (62%) is still a solid third choice, especially with the map preference that the teams presented. Omen (62%) finally replaces Brimstone (52%) as the preferred Smoker. Finally Phoenix (50%) just reaches this Tier 2 and proves to be a recurring choice for North American squads.

Jett (45%) continues to increase her usage on a report by report basis. The Operator is in an excellent position now and Jett can take great advantage of it. Raze, (35%) despite the nerfs to her ultimate, remains a recurring option for the fifth slot in teams.

Reyna (10%) is usually chosen by certain players and only on some maps. Breach (8%) doesn't have a place in North America, it is specific in certain maps and by some teams, like Sentinels who used it whenever they could on Ascent. Finally we have Viper (4%), the buff doesn't seem to have had too much of an effect on her. We saw her in the grand final being used by Cloud9, but without good results.

Bind is the most popular map, but Ascent was the second favorite in this tournament, replacing Haven, which in previous tournaments was competing for first place against Bind. Split remains the teams' least favorite map. Cypher is a solid pick on all maps and there are no major pick rate differences between the maps. Sage is a very good choice for Bind, Haven and Split, but on Ascent teams are trying to play without it. Sova is very widely employed on Ascent and Bind, the two most played maps, but on Haven and Split he is dropped, especially on Split. Omen and Brimstone play similar roles in the teams; Omen is the preferred choice on Ascent, Haven and Split, while Brimstone is the favorite on Bind. Some teams tried to use a combination of both, especially on Ascent, but without very good results. Phoenix is widely used by the North American squads, mainly on Haven, on Split he is generally dropped. His place is then taken by Jett or Raze. While Jett is a recurring option also on Haven, her pick rate decreases on Ascent and Bind; on this last map, Raze usually fulfills that position. She is also a recurring option on Split. Ascent is the map where the teams are testing things, either with the double smokes of Omen and Brimstone or testing with agents like Reyna or Breach or no Sage. Little was seen of Viper, but when she appeared, she did so on Split.

With such an extensive group phase (89 maps) and taking into account that there were several streamer invited teams, I decided to verify that the total match report was a good representation.

For this I separated the data in Total, Groups and Playoff:

There were no big differences between Groups and Playoffs. In terms of growth in playoffs from the group phase, the most notable is Cypher as a must-have option in the playoff. Sage was unchanged, which is quite surprising considering how she was used in previous reports. Sova is also a more recurring option in playoffs, while the situation between Brimstone and Omen is inverted with regards to the overall pick rate - Brimstone was selected more in the playoffs than Omen in the group phase. Duelists, on the other hand, all lowered their pick rates, Phoenix, Jett and Reyna had the biggest changes, while Raze only lost a little bit of her pick rate.

Considering the most used compositions throughout the tournament by maps we have:

Bind was not only the most chosen map, it was also the map that the teams agreed which ones were the most effective composition.The core of Brimstone, Cypher, Sage, and Sova were present in the two most used compositions. Some teams, including the champion of the tournament, Sentinels, chose Phoenix for his ability to play aggressively, while others, like the runner-up Cloud9, used Raze, something we are more used to seeing on Bind.

On Ascent the situation changes a bit. Cypher, Omen and Sova are played again but a composition without Sage appears in the Top. While Cypher, Jett, Omen, Sage, and Sova has a style of game to which we are accustomed and similar to as they play other maps, with Brimstone, Cypher, Omen, Phoenix, and Sova the Sage is sacrificed and the double Smoker is applied (Brimstone and Omen). Ascent is a map with a very open central area and where having only one Smoker can sometimes feel insufficient.

The two most used compositions maintain a core of four: Cypher, Jett, Phoenix and Sage. The teams make the difference in their game style with their Smoker, while most prefer Brimstone, others incorporate Omen as their only Smoker on Haven. Sova is left out and they focus on aggressive agents like Jett and Phoenix.

Looking at the Champion:

Looking at Sentinels in detail we find a team that played one composition per map:

Some Interesting things to mention are that they used Cypher and Sage in all their games, always hand in hand with dapr and SicK respectively. They rotated between Brimstone and Omen, both played by zombs, according to the map: on Haven and Bind Brimstone, on Ascent and Split Omen. They never used double smokers. ShahZaM and sinatraa are the team's flexes; ShahZaM uses Jett, Sova and Breach while sinatraa uses Phoenix, Sova, and Raze. Despite Breach's lack of use in this tournament, Sentinels made the most of it and won all of their matches on Ascent, raising the question of why he's not used by other teams in the region.

Is Breach a viable option?

Breach was used 16 times in the tournament (8% pick rate). The teams that used it were:

Overall, the composition had a win rate of 81%, proving to be effective, particularly on Ascent, but Team SoloMid took advantage of it on Haven and Split. Breach was played mainly by established teams that usually get good results in tournaments. We will have to wait for the next tournament to see if other teams decide to implement Breach or if it will remain a minority option. The numbers are quite promising, with such good results I would be surprised not to see a bit more of Breach.

Finally, the week-by-week use: 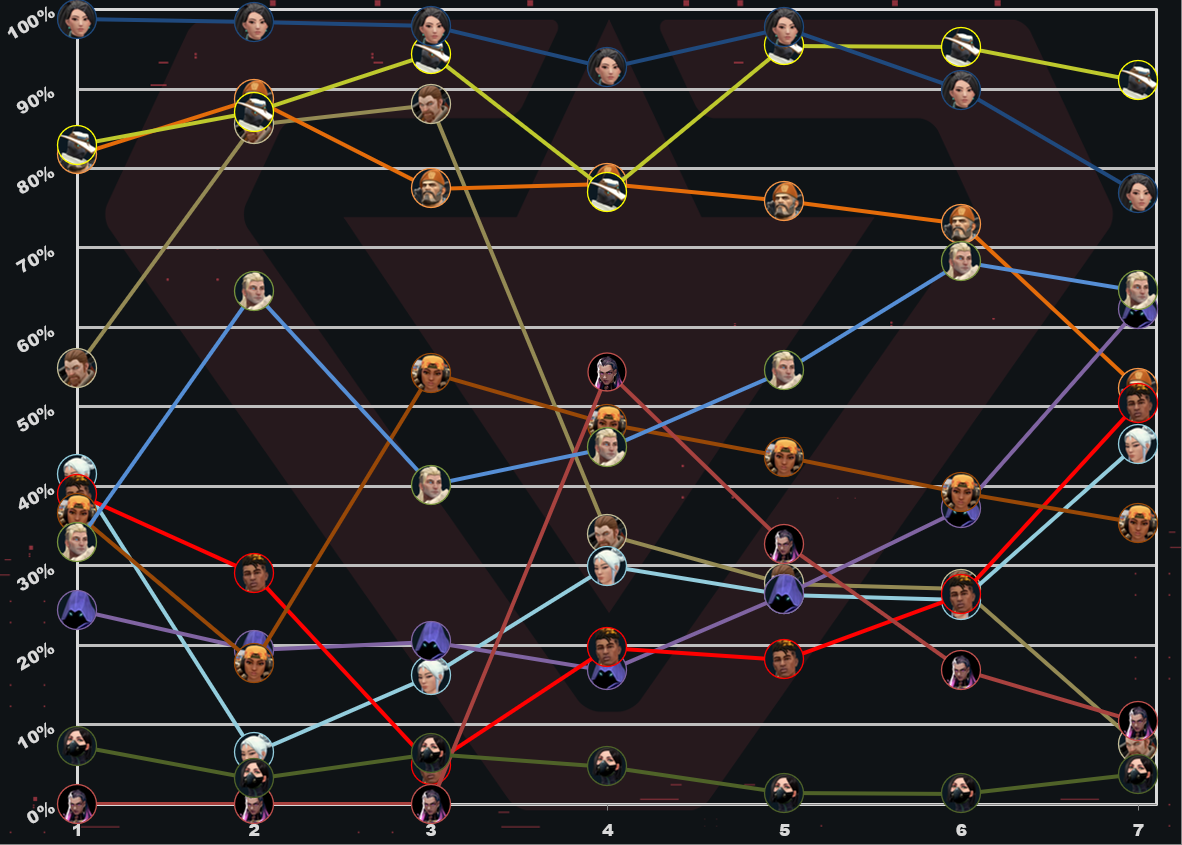 Things to keep in mind: This report contains only North American data while previous reports considered both North America and Europe simultaneously. Phoenix and Breach's abrupt changes are related to this, Phoenix is far less used in Europe, while in North America he reached Tier 2. Sage's decline is also interesting, from being the undisputed leader of the meta to losing her place to Cypher and finally falling to Tier 2. As we saw in the playoffs, Cypher maintained a 100% pick rate while Sage was around 80% (very similar to his pick rate considering the group stage), this is an indicator that Cypher will continue to maintain his position at the top of the ranking for a little longer. Omen's rise and Brimstone's fall is something we've been mentioning for a while now, with similar game styles and with some teams preferring one over the other according to the map, we may have reached, or are close to, a balance between these two agents. Phoenix is very popular in North America, and Jett is still an increasingly popular choice. Raze is slowly losing space, but on maps like Bind or Split she’s usually the favorite. Reyna and Viper are in a very precarious condition - Viper, despite the buffs she received, could never exceed 10% pick rate. Reyna, after her initial spike in pick rate, has been lowering until she’s now become a less frequent option.

In less than a week we'll have a new agent, Killjoy, and see if she can compete for the place of the agents already installed as a core. We don't know if she will dispute her slot with Cypher or if she will join the compositions as another agent that allows teams to keep control of an area of the map without having to be present. I'm going to follow closely the performance of Sage and Breach in the upcoming tournaments and see how the teams adapt; Considering that on Ascent many teams decided to sacrifice Sage, perhaps it is one of the maps where we see more Killjoy. Do you expect to see changes in the meta with Killjoy ? What place do you think she will occupy? Let us know your thoughts!

bombastikkkk
wtf cypher picked more than sage - interesting. wonder what will happen to cypher's pick rate when killjoy comes in
2020-07-31 19:03
RkT
I think the most dangerous thing, seeing how effective Cypher is, is that KillJoy adds to the current compositions, to provide even more control of the map.
2020-07-31 20:46
ANS | Germanicus
Yeah, it'll be really interesting to see whether killjoy replaces cypher or complements him.
2020-07-31 20:47

bombastikkkk
in defense for sure, but don't forget attacking as well. i mean a turret mid round will be difficult to use, after plant is for sure a great tool. the more you use these agents, the more you need to plant
2020-08-01 06:27
RkT
We're going to have to wait and see how Killjoy ends up being used. I agree that in attack it's probably less effective, the only thing that gives me some confidence is its ultimate. With the range his ultimate seems to have, it could become a key tool in attacking bomb sites
2020-08-01 08:50
Zillons
Cypher may get nerf this update.
2020-08-01 11:23
HypeN
I'm fairly sure That most teams will just resign from 1 other character just to have Cypher Killjoy duo comp. And its looking scarely
2020-08-01 13:20