Fnatic core with Leo and Chronicle, scarier than ever

written by ArmandVanHelden January 24, 2023 at 5:2pm
share on
One of the most famous European esports organizations of all time, Fnatic, had one of the better performances in 2022 from the EMEA region. The VCT 2023 - EMEA League wouldn’t have made sense without the organization and it was expected they would become one of the partnered teams, playing in the VCT International Leagues in 2023. Fnatic will come up against the best teams in the EMEA League with two new players on the roster. Let’s dive deeper into Fnatic's recent roster changes, statistics, expectations, and more.

The Fnatic organization was founded on July 23, 2004, by Sam Matthews and Anne Matthews and it is based in London, United Kingdom. As of now, they are competing in eight different gaming titles. As an esports organization, Fnatic’s past is full of achievements and trophies, including their newest division, VALORANT. Fnatic signed the overperforming SUMN FC roster and announced their entrance to the scene. The organization started things off by making it to the VCT 2021: Stage 2 Masters - Reykjavik but failed to win the trophy after getting swept by Sentinels in the final stage. 2022 was a lot better for Fnatic as they dominated the EMEA Stage 2 Challengers and won their first regional trophy. Fnatic also appeared in every major tournament last year, placing fourth in Stage 2 Masters Copenhagen and 5th-6th in VALORANT Champions 2022. Even though they are yet to win an international trophy, they dominated the scene regionally.

Fnatic managed to keep the core from 2022 and added two new talents for the VCT 2023 season. Boaster, Derke, and Alfajer played important roles in FNC’s success last year and they remained with the organization at least for the VCT 2023 - LOCK//IN challenge. Mistic and Enzo left the team, finding Apeks as their new home. Meanwhile, Fnatic filled the missing slots in the lineup with Leo and Chronicle. Lastly, kamyk joined the team as the sixth player who recently parted ways with UCAM Esports Club.

Nikita "Derke" Sirmitev: Derke has been playing for FNC since VCT 2021: Europe Stage 2 Challengers 2. After his arrival, Fnatic made it to their first-ever Masters tournament and since then, he has been one of the most important pieces of the team. The Finnish star is sitting at a 1.26 rating and a 1.30 K/D. He played Chamber for the majority of the 2022 season but with the recent nerfs, we might see him more with Jett rather than the French Sentinel. Lastly, he led VCT 2022 OFF SEASON - SUPERDOME’s rating leaderboard with a rating of 1.41 in 11 maps.

Jake "Boaster" Howlett: Boaster has been playing for Fnatic since the organization decided to run a VALORANT division. He is mostly known for playing smoker agents but what he is even more famous for is that he is the face of the team in VALORANT. You never know what he will do when the spotlight is on him, but fancy walkouts and celebrations are his game. When it comes to his experience, Boaster has a lot of ton of it both regionally and also internationally.

Emir "Alfajer" Ali Beder: The young Turkish talent made his name known with [Surreal Esports](https://www.thespike.gg/team/surreal-esports/6734) and quickly received interest from the top organizations in Europe. Alfajer joined Fnatic before VCT 2022: EMEA Stage 2 Challengers and played a big role in the team’s championship. Shortly after joining the European powerhouse, Alfajer competed in two major international tournaments. He is currently holding a 1.21 rating and a matching K/D with Derke, 1.30.

Leo "Leo" Jannesson: One of the newcomers to the FNC organization. Leo had impressive performances under the Guild Esports banner and became a respected player in the region in a short period of time. Despite his individual talent, he only appeared in one international tournament, VCT 2022: Stage 2 Masters, and couldn’t make it past the first round of the playoffs. Leo holds a 1.28 rating and his most-played agent is Sage, followed by Sova.

Timofey "Chronicle" Khromov: After the disbandment of [M3C](https://www.thespike.gg/team/m3-champions/741), every player on the roster joined different organizations. Consequently, Chronicle was picked up by Fnatic. He was one of the top-performing players on his previous team and even won an international tournament, VCT 2021: Stage 3 Masters Berlin. Chronicle also made it to the VALORANT Champions 2021 Grand Finals but lost against Acend. Shortly after joining FNC, he played his first game at [Riot Games ONE - PRO INVITATIONAL](https://www.thespike.gg/events/riot-games-one-pro-invitational/2113) and led his team with a 1.33 rating in two maps.

Maks "kamyk" Rychlewski: Joining most recently, the Polish player will be the sixth man of Fnatic's VCT 2023 roster. He won the VRL 2022 East: Surge Stage 1 trophy with Anonymo Esports and competed for Rebels Gaming in the following split. kamyk’s go-to agent is Raze with 59 picks and he has a 1.23 rating with on that Agent.

Jacob "mini" Harris: Alongside Boaster, mini has also been working for Fnatic since the first tournament of 2021. He was a part of the SUMN FC that was signed by FNC. He has seen many trophies and shown his knowledge regionally and also against international opponents. 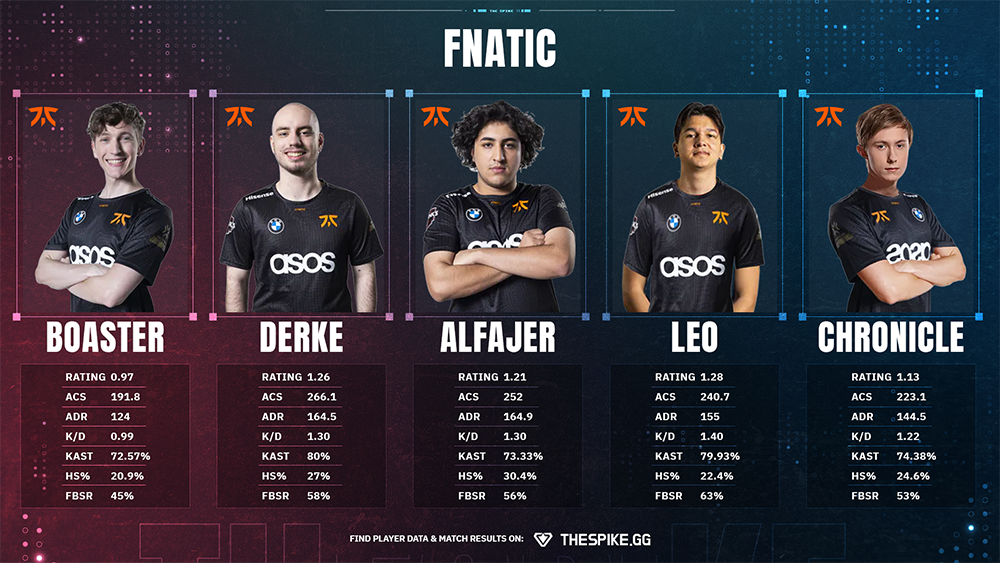 Expectations from Fnatic in 2023

Fnatic had a very strong roster last year and it even looks better on paper with the arrivals of Chronicle and Leo. When new players join a team, the thing that matters the most is chemistry. If talented players get along well both in and out of the game, that is one of the ingredients to success. We had a chance to watch them against ZETA DIVISION and Detonation FocusMe and the European team had great performances in both games. Overall, Fnatic are definitely one of the favorites of VCT 2023 - EMEA League.

With the new league model, the competition will be higher than before as the rosters look even stronger than before. More information about the rosters and tournament structures can be found on VCT 2023 Hub.