Yesterday marked the conclusion of VCT 2022 - Champions Istanbul with the Grand Finals between OpTic Gaming and LOUD ending in the Brazilians’ favour after a well-contested battle over four maps. In such a crucial matchup, the entire roster plays a unique role to gain even the slightest advantage over their opposition. However, some players naturally tend to have a greater impact on the game, and it was Bryan "pANcada" Luna who led the team in terms of performance throughout the Champions event; therefore, has been selected to receive THESPIKE.GG’s MVP award. 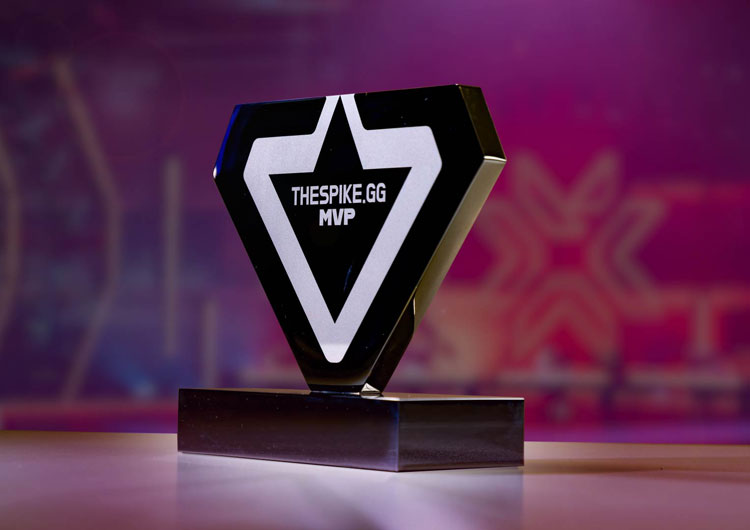 Coming into 2022, no one was familiar with Brazilian team named LOUD because the organization hadn’t made the entry in the Valorant scene yet. However, a week before the start of VCT 2022 - Brazil - Stage 1 - Main Event, they announced the signing of their roster which had competed in the Open and Closed qualifiers under the Pancada e amigos name. From the first tournament they ever participated in, their dominance in the region became apparent as they won Stage 1 Main Event without dropping a single map against the likes of NIP, Vivo Keyd and FURIA.

Their win granted them a spot at Reykjavik where they surprisingly outperformed most teams and earned a Grand Finals trip against OpTic. Unfortunately, the NA team got the better of the team and they returned with a 2nd place finish. In both of these tournaments, pANcada played on five different Agents making him one of the most effective versatile players. Several other players attempted to do the same, but were unable to enjoy the same consistency pANcada did.

During Stage 2, LOUD continued their regional domination earning themselves a spot at VCT 2022 - Stage 2 - Masters Copenhagen. Despite a formidable international debut, their performance did not withstand the test of time and suffered a major upset courtesy of KRU Esports and OpTic sending them back early from the Group Stages itself. pANcada continued the use of a diverse Agent pool but had less impressive showings during both tournaments likely since the team did not encounter much success either. 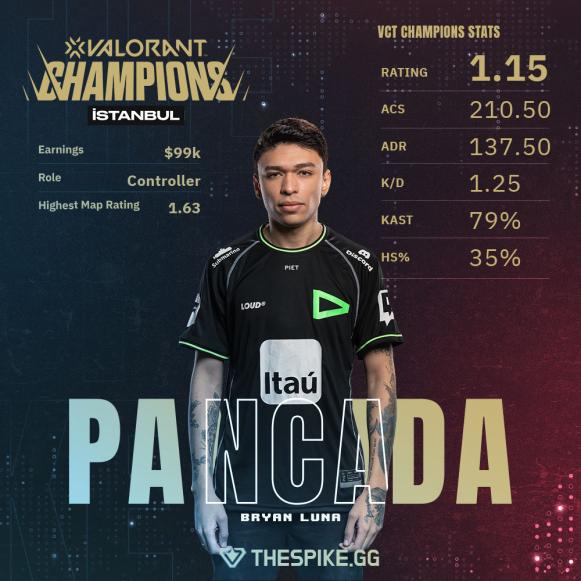 Making Masters in consecutive stages was enough to earn them a spot at Champions Istanbul and they were determined to capitalize on this opportunity to lift their first International trophy. They had a plausible start to the tournament with an easy win against ZETA Division, but then faced their sworn rivals: OpTic Gaming. They couldn’t keep up with the NA Challengers and tasted defeat early in the tournament.

Nonetheless, they still found their way to the Playoff Stages by eliminating ZETA Division in the Lower Brackets. The loss against OpTic served as a wake-up call to improve certain aspects of their gameplay, which proved to beneficial as their undisputed Upper Bracket run began with easy wins against Leviatan and DRX. A rematch then lay in their path against OpTic Gaming, but this time they came prepared finessing through Bind and Ascent with little resistance.

After OpTic had been relegated to the Lower Brackets, they fought their way back by defeating DRX in the Lower Brackets, which meant that Grand Finals would be the third series between LOUD and OpTic within the same event. A coincidence greatly appreciated by the Brazilian and North American fans alike. Although the matchup did not go the distance, it was nothing short of a thriller with two of the four maps going to Overtime. pANcada was the best player on LOUD finishing the tournament with 1.15 Rating, 210.5 ACS and 1.25 KD. 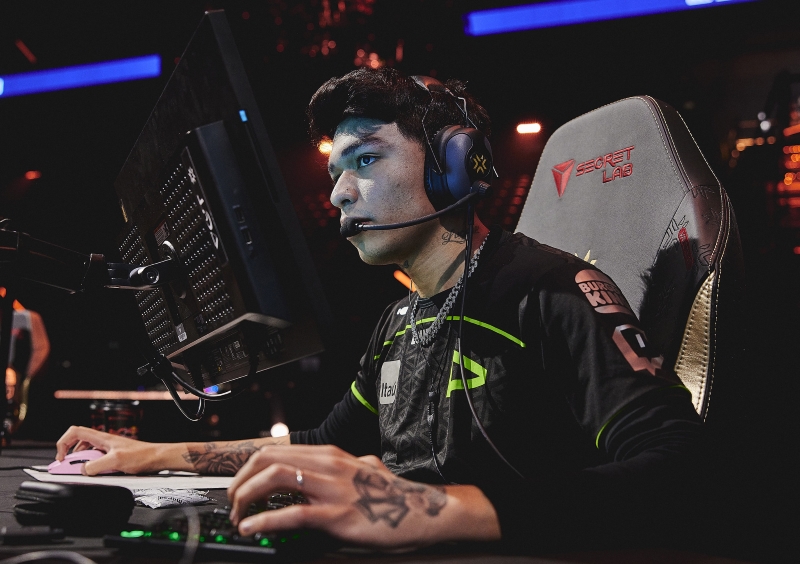 pANcada onstage at Champions Istanbul. Credit: Riot Games
Despite playing on such a diverse Agent pool, he managed to finish with those statistics making him a worthy choice for THESPIKE.GG MVP award. His efforts in the Grand Finals were extremely vital on Haven to deal the final blow and secure the title for LOUD. During their Offensive run, he contributed towards a total of 16 Kills over six rounds finishing with a 2.05 Rating and 364 ACS in that half alone.