When First Strike was announced nearly two weeks ago, the competitive community once again awoke with a little spark in the eye, just thinking about another circuit that will allow them to play on the highest level of competition. The Riot Games operated and organized series of events was a light of hope for the end of the show matches and invitation-only tournaments, but the details regarding First Spike in many regions are yet to be known.

Some, however, have started giving out the details for the regional competitions, with South Korea being the first one to provide a fully comprehensive schedule for their road to First Strike. The early activity from that region shouldn’t be a big surprise as shortly after the reveal of First Strike, VALORANT Esports Strategy Lead, Kasra Jafroodi shared with the community more on the tournament’s timeline and breakdown. Some of this information was regarding South Korea being recognized as a Major region in the newly announced competition.

South Korea took part in the Twitch Rivals: VALORANT Launch Showdown followed by an early announcement of Riot Games Korea and INVEN joint project called Clan Battle. The weekly tournaments finished with the main phase of the event, Clan Masters 2020 in which DRX VS saw one of many of their victories in the region.

Followed by the success of Clan Battle, the next season of the competition will be the gate for the teams to enter the First Strike Regional Finals. 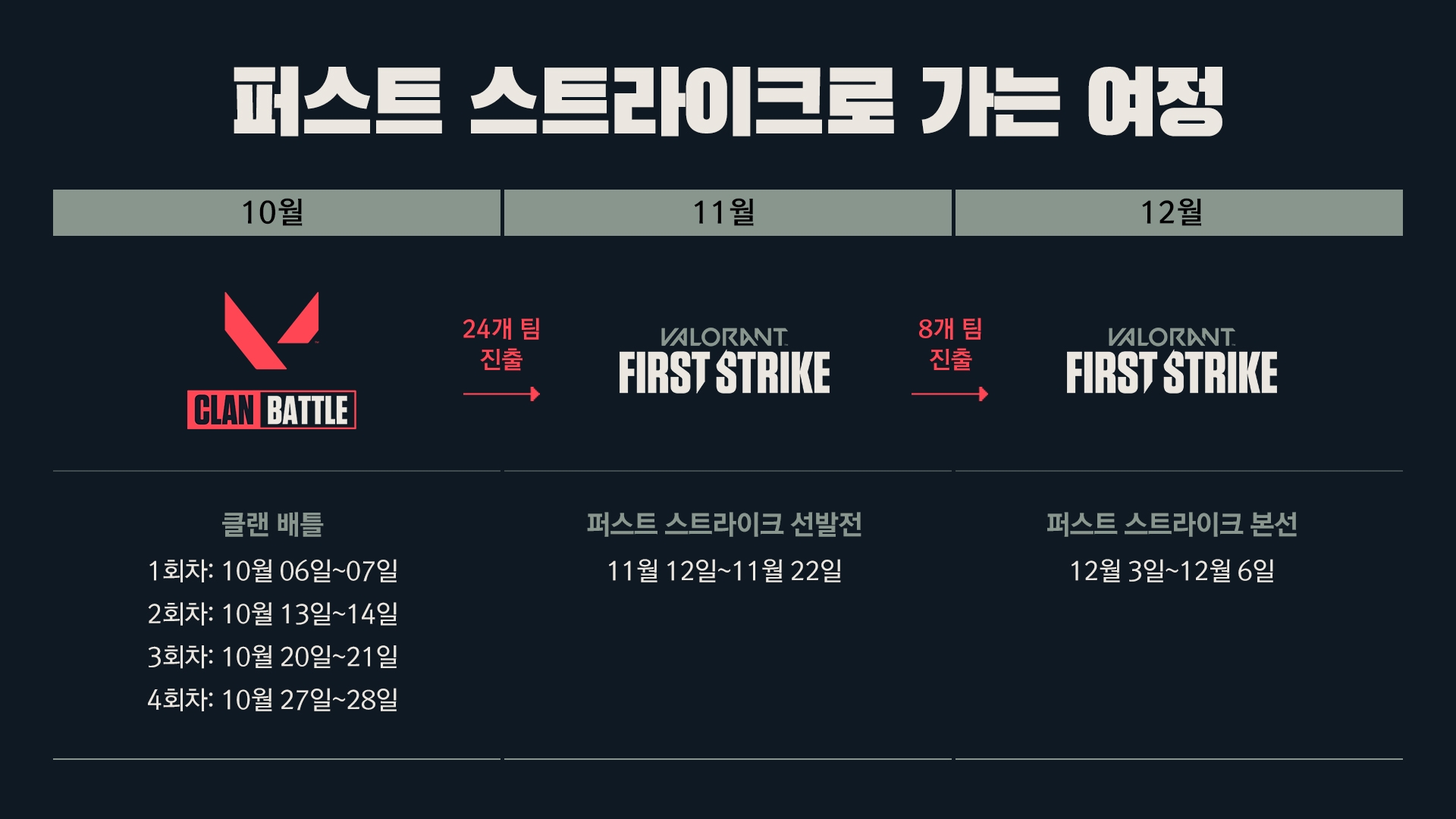 Similar to the first edition, Clan Battle Act 2 will occur online every week on Tuesday with a total number of four. The first event, Clan Battle Act 2 #1 is scheduled for today, October 6th, 2020 at 6 PM KST. The semifinals and finals will be played every Wednesday at 7 PM KST. The finals will be played in a best-of-3 format, meanwhile the rest of the matches in a best-of-1.

Every week the teams will have a chance to gather First Strike Circuit Points, and with the conclusion of the fourth week of Clan Battle, 24 teams with the highest number of points will advance to the First Strike Qualifier.

Despite the fact that participation in the Clan Battle Act 2 is open to every team with at least three South Koreans, the First Strike Qualifier set a restriction to a minimal rank being Immortal. Out of 24 teams, those that placed 9th-24th will face each other in best-of-1 matches in the first round, with the winners advancing to battle against the teams seeded 1st-8th in the second round. The best eight teams from First Strike Qualifier who win in the second round will progress to the First Strike Regional Finals in December.

Since the creation of Vision Strikers, the team hasn’t lost a single tournament they participated in, including the recently finished Epulze's Royal SEA Cup. They still have A.W EXTREME MASTERS ASIA INVITATIONAL ahead of them, but the upcoming Clan Battle will be another occasion for them to dominate the scene similar to how G2 Esports is doing it in Europe.

What do you think about the format of the South Korean First Strike? Do you think more regions will introduce similar rules or will we see something more common in the European and North American regions? Let us know!