We are starting a new series of the - Meta report! The scope of these reports is to track how the competitive scene evolves, what form the meta takes over time and how it adapts.

The teams are still in formation and the game itself is in a stage of development and discovery. The matches that were used for this report are from various show matches held by the esports community figures. There are many streamers and content creators involved, but many of them are looking for their way to the highest level of competition in the newest Riot Games’ title. That's why in the first report that is focused on the closed beta, the purpose is to serve an orientation tool to see where it all starts. 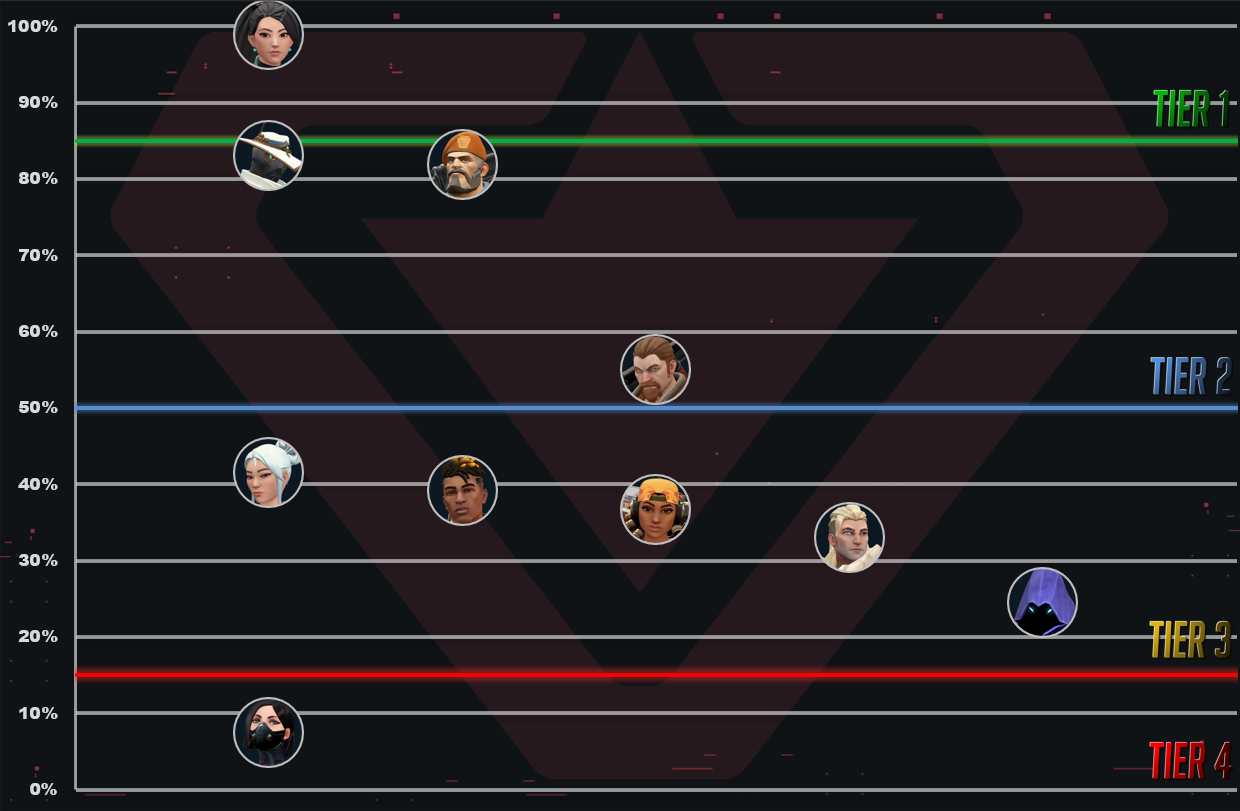 Sage (99%) is the agent that nobody wants to leave out, with a versatile kit and a lot of impact in the game. Icewall that can work defensively or offensively, healing for damage trades is impressive, its Slow Orb, even after its changes in the 0.47 patch, it allows to control areas effectively. Finally, Resurrection gives you the versatility of being able to change the outcome of a round or play with the economy of the next round.

The core of the team, they provide useful tools and are difficult to replace.

Cypher (83%)’s camera allows us to peek in dangerous places in a safe way, the traps give time for the rotations of our teammates, the trap wire even if destroyed it gives us information of where our opponents are. Neural Theft gives you information where all your enemies are and act accordingly both for attacking and defending a particular bomb site.

Brimstone (82%) has the best smokes in the game, an ultimate that allows you to zone safely and for a long time. The rest of his kit does not fall behind, Molly follows the same way of playing, makes it difficult to rotate around certain areas and the stim beacon allows that attack speed boost for damage exchanges.

Breach (55%) is a good example of the importance of abilities in team play, his skills kit works much better when combined with a teammate. Use Flashpoint, Fault Line or Rolling thunder so your teammate can rotate safely and with some advantage over your opponents.

Jett (41%): Mobility and the ability to get some off angles is one of the reasons why Jett is so popular; her ultimate, is a great way to play during the ECO rounds. Her kit is not as team-oriented as others agents. Her ability to peek and fall back using Tailwind gives aggressive plays an advantage over the enemy.

Phoenix (39%): Curveball is an excellent tool for getting onto bombsites or starting an engagement, while Blaze allows you to block sight for a safer rotation. His ability to heal himself frees up Sage's healing for another player. His ultimate, in addition to the pick potential it has, allows you to get information on opponents.

Raze (37%): In the competitive world she was not so popular and with the changes in the 0.47 her pick rate started to decrease. Let’s not be mistaken, her kit is very disruptive and its effect on not-so-organized games is devastating. With great potential for kills she is extremely selfish and adds little to the rest of the team, and that is a weakness in competitive play.

Sova(33%): Great for gathering information. Recon bolt and Owl drone provide a lot of information about the opponents. Probably as time goes by and as the players master the bounces of the arrows Sova will become more and more popular.

Omen (24%): What I find most interesting about his kit is the dark cover, being the only smoke with cooldown in the game, allows the teams to force skills of the opponents at the beginning of the round and still have some smoke as a resource for a late push.

Viper(7%): Mainly used on Split but without much success. She seems to not find her place in the meta and it's not surprising that she was present on Split, as it’s a map that is currently very oriented to defenders and teams try different things to get the upper hand.

Sage, Cypher and Brimstone are the core of today's compositions and they are picked in all maps as they can be found in a balanced way in each map and with almost 80% pick rate.

Breach, Jett, Raze, Phoenix, Sova and Omen are the flexible pieces, varying according to the map, the players and the game styles adapted by the teams.

Most of this information is gathered from pre patch 0.47 (Raze and Sage nerfs) so surely the use of Raze will decrease in the next weeks, although within the analyzed pre patch matches her pick rate was less than 40% and mainly used in Bind and Split.

Finally we have Viper that is mainly used in Split. It's a complicated map and the teams try to find some way to get advantage as attackers or try to secure the 12 rounds as defenders.

It's too early to draw conclusions, but two agents are gathering attention to themselves.

Sage with 99% total pick rate, was only absent in three cases: twice on Haven, team Dev decided to not use her in the ESPN Invitational the semi-finals against Team Mirage (they lost 13 - 11). Team Rift in the group phase of the first day of ESPN Invitational opted for a lineup without Sage (losing 13-0 against team Mirage). On Split the only team that didn't use her was TimTatman's team against Team Shroud in the grand final of the 100Thieves Invitational (resulting in a 5-13 loss). That makes it a 100% map loss whenever she is not picked.

Team Myth in the Code Green Invitational used her twice on Haven in the group stage, and got two victories (13-0 and 13-1 against Bnans and Jordan Fisher). In the case of Bind Team Mirage used it in the final of the ESPN Invitational (getting a 13-8 victory where Team Mirage started defending).

These are the first steps this game is taking, the goal will take shape over time and there are many things to discover. The number of tournaments is increasing, the idea of these analyses is to focus on competitive play and not the show matches, but it was a good point to start this new series on THESPIKE.GG. Stay tuned for more!

quite sure Cypher, Brimstone & Sage will stay there unless they are nerfed or other agents are super buffed by Riot to change meta. Still quite surprised omen + viper are that low - omen smokes are quite good and viper walls + ulti are very good as well. will see how this evolves but I believe we will see more of viper
hex4 2020-04-26 09:31