As the weeks of VALORANT Closed Beta go by, the teams are more consolidated and many of them already have an established core of 3 or 4 players. Two weeks have passed since the first Meta Report and we have not had any big surprises as we can see from the tier list: 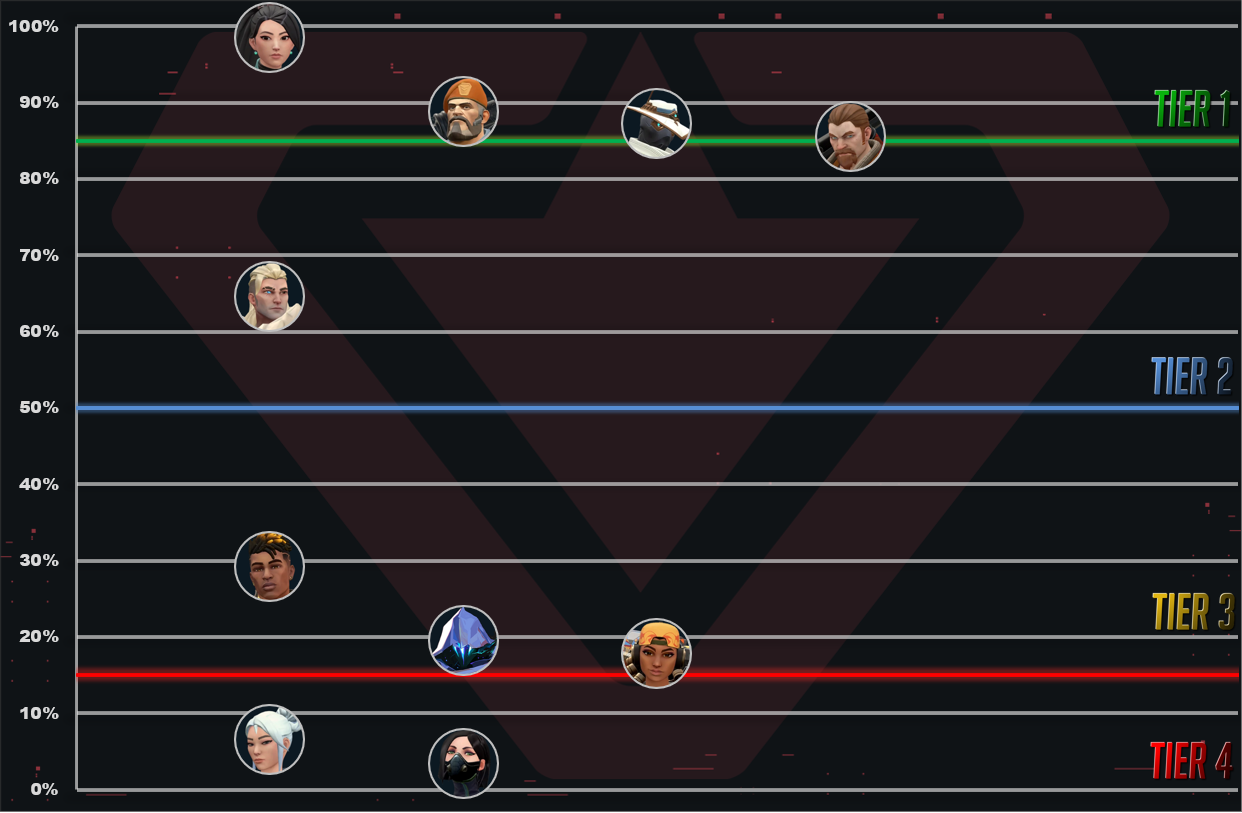 The information in this report comes from the G2 European Brawl (9 games) and the T1 x Nerd Street Gamers Invitational (22 games). This information is about competitive matches, it does not represent the meta of casual/ranked games.

Sage (98%) remains as the must pick for all maps, the only one exception was at the hands of Shroud's team in Split. No other team leaves her out; It is important to keep in mind that Sage's kit is intended for team play and affects the displacement of opponents on the map.

Brimstone (89%) and Cypher (87%) grew in pick rate since the last report and managed to get into Tier 1.

Brimstone allows for excellent zone control and the ability to use Sky Smoke from safe positions and at various points simultaneously makes him the most popular smoker.
Replacing Cypher's tools in the team is complicated; in maps like Split he is usually covering B alone: The camera, one or two Trap Wires and the Cyber Cage generate enough time for the rotations to arrive from Middle and B Haven.

The last one in this category is Breach (85%). His pick rate increased remarkably since the previous report (from 55% to 85%). Most of this growth is due to improved team synergy. While Sage, Brimstone, and Cypher provide efficient tools to the team without the need to combine them; Breach is different, his skills are much more effective when played as a team; most of them force the opponent to move and this shines when Breach plays with another agent to push positions. One combination that is becoming very popular is Rolling Thunder + Orbital Strike, a combination that was seen several times in the T1 invitational NSG, a big investment but could be the tool you need when you are at a numerical disadvantage.

Sova (65%) was the other agent with the most increased use along with Breach (from 33% to 65%). He is an agent that requires time to get used to it. Personally I think he is one of the Agents with the highest skill ceiling. He is excellent at attacking/retaking sites and together with Breach his skills work better working together.

Despite being a great character for SoloQ, Jett (6%) is not the favorite in competitive games. Her kit is extremely selfish and as an aggressive entry fragger, Phoenix has more synergistic tools with the team.

Viper (3%), once again, could not escape this category. Being used mainly in Split, she is a specific pick for a map that most teams are trying to avoid.

Sage, Cypher, Breach, and Brimstone are the core of all current compositions. The fifth most common agent is Sova, but on certain maps, we have some variations.

On Haven, Phoenix has a notable increase in its use, and the teams that used him obtained good results.

On the other hand, Bind has greater participation of Raze and particularly in the case of the G2 Invitational Omen was picked much more. There is still not enough information available, but considering that there will not be a level playing field between Europe and North America for a long time, different meta can be developed in both regions.

The trend is similar, the core of Sage, Brimstone, Cypher, and Breach is being picked in both regions. Sova is still the most usual complement, but they differ mainly in uses of Raze and Omen. 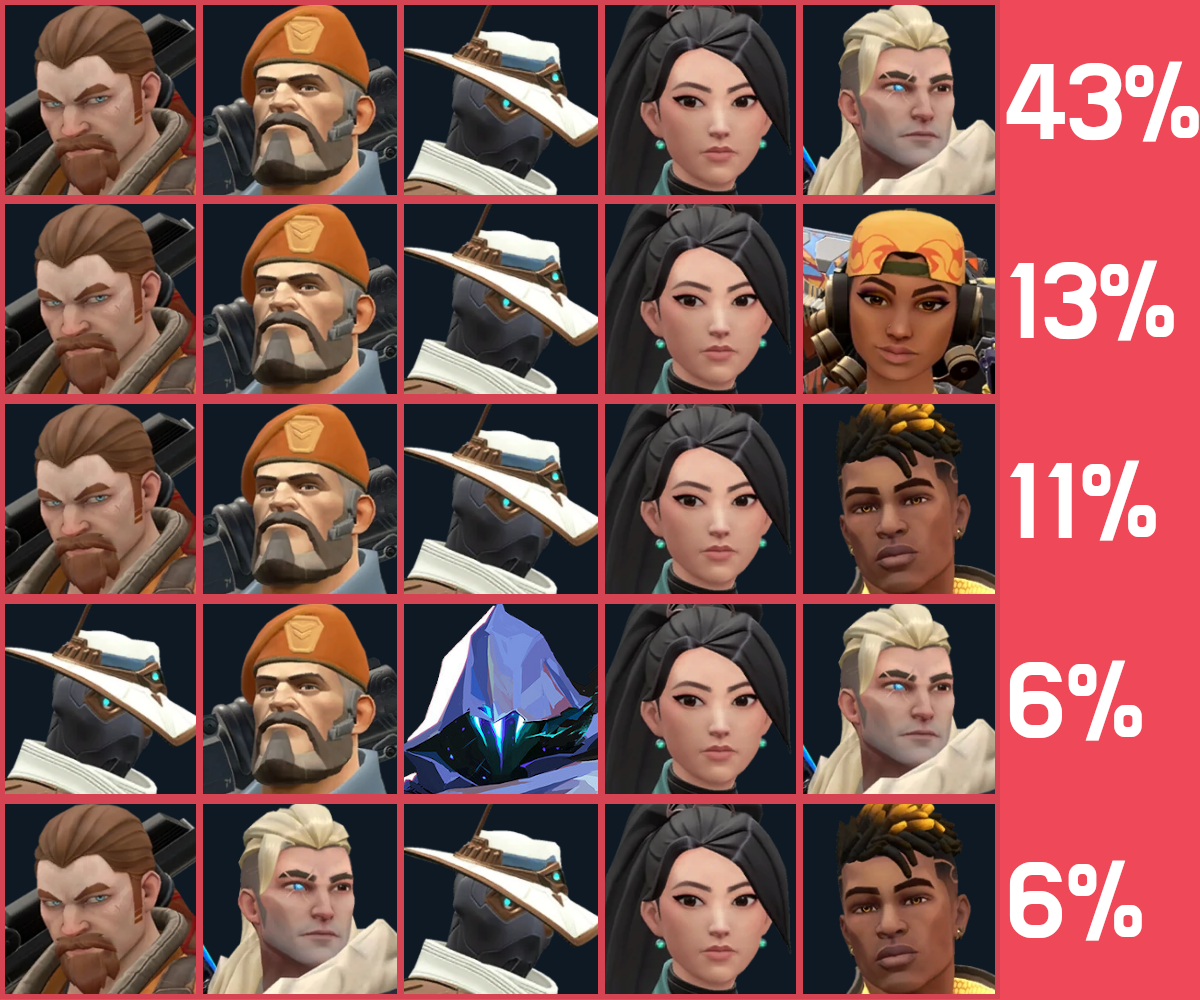 The remaining compositions used: (all of them with 1 single-use, i.e. 1.6 % pick rate each)

The meta is clearly starting to take shape including Breach, Brimstone, Cypher, and Sage as the core four agents. We can say that the fifth agent is still in dispute, at least with variations depending on the map. We are still in a trial stage; the good news is that there are more and more tournaments open for the whole community and maybe this will allow us seeing different compositions getting results.

If you would like to see more details of the compositions by map and teams, I’ve prepared a special chart for you that you can check out here!