VALORANT Meta Report #3: The End of an Era

These last few weeks were a great example of a young meta with the potential for change. In Meta Report #2, we could see a core composition, but in these two weeks, the teams looked for different ways to achieve victory, especially in Europe. In the 71 games analyzed (Mandatory Cup from EU: 24 games, Solary Cup from EU: 20 games, Take the Thrones from EU: 3 games and VALORANT Academy - North America: Closed Series Week 4 from NA: 24 Games) there were some interesting choices, but before going into detail let’s have a look at the agents tier list: 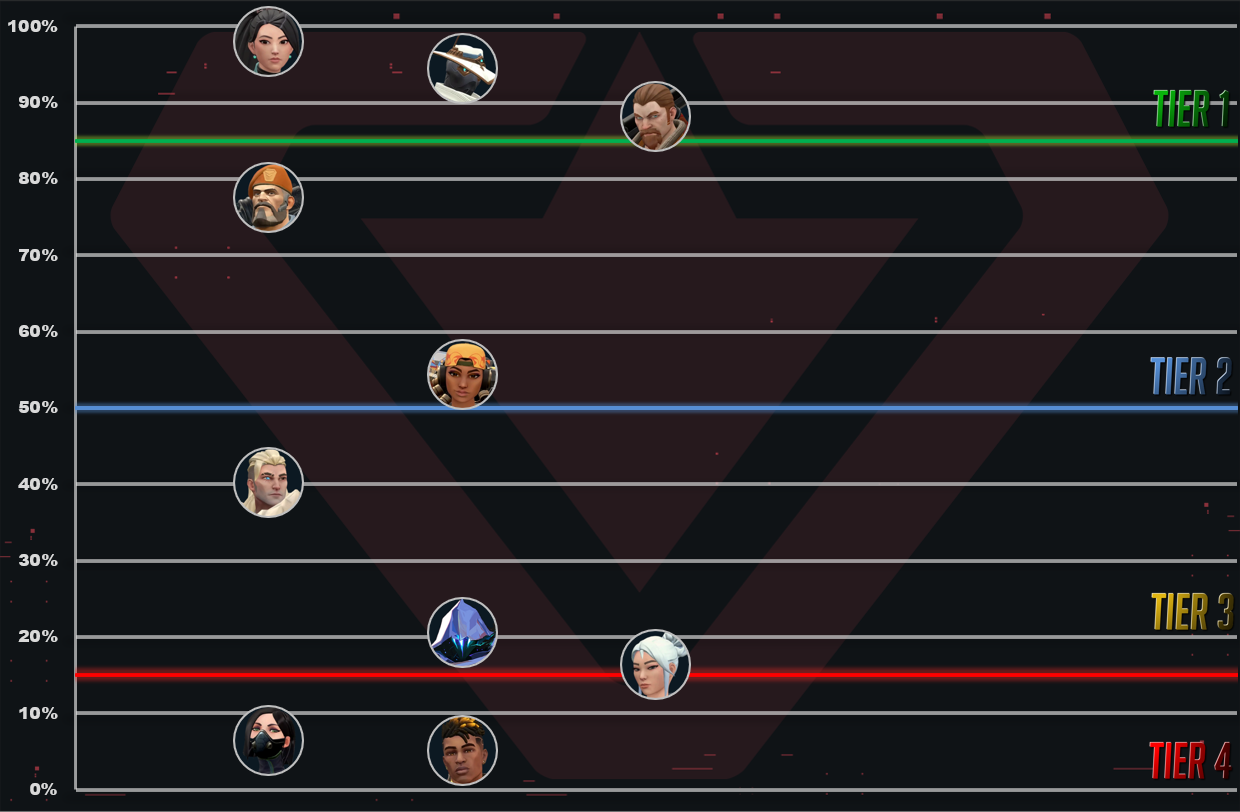 The first surprise is Brimstone (77%) who falls from Tier 1 in report #2 and the second surprise is Raze (54%) who takes the place of the fifth most chosen agent, displacing Sova. Raze is the preferred choice for completing compositions on the European side.

Sova (40%) remains the preferred choice as the fifth agent in North America. Some teams (such as HypHypHyp) choose Omen (20%) as their source of smokes. Jett (16%) is a recurring choice of some teams, like Fish123, and especially on Haven.

Viper (6%) had a slight increase, most of its pick rate came from Prodigy (being used by Mixwell) and on Bind (unlike the first weeks where she was played mainly on Split). Finally, we have Phoenix (5%) who this week didn't see much use (Nerf to Curveball cost in patch 0.50), but I wouldn't be surprised to see a rebound of his pick rate at launch.

Why the increase in Raze pick rate?

Understanding why movements in the meta occur can help us understand what variables higher level players are taking into account. That's why, in this edition of the meta report, we will try to understand what made Raze's pick rate go up.

Raze has a much higher pick rate (almost 25% more) on Split, a map that was favored by many teams during these weeks. In meta report #2 Split's pick rate was the lowest of the three maps, almost 50% less than the second most played map. In this report, Bind became the least played map. Sova has his highest pick rate on Bind (52%) and his lowest on Split (11%). This gives us an indication of why Sova’s pick rate decreased so much.

We can also analyze how the pick rates were per tournament

The difference between regions is noticeable. Mandatory Cup and Solary Cup were played in Europe, while the Liquid Academy in North America. Raze had an especially high pick rate at the Mandatory Cup, where teams like Prodigy (who normally used to play Sova as their fifth agent) opted for Raze for this cup, probably because their usual Sova player, Dafran, did not participate in this tournament. In the Solary Cup, Raze's pick rate dropped a bit and Sova took the given space. Fish123 kept using Raze during this tournament, but Prodigy returned to their composition with Sova. On the North American side, (VALORANT Academy - North America: Closed Series Week 4) Sova reaches Tier 2 (52% pick rate), while Raze remains at Tier 3 (33% pick rate).

With Raze's pick rate in the Mandatory Cup, it is not surprising that Breach, Brimstone, Cypher, Raze, and Sage is the most picked composition. The second favourite composition Breach, Cypher, Omen, Sage, and Sova was used mainly by HypHypHyp and the third one Breach, Cypher, Jett, Raze, and Sage is the variant that some teams use on Haven, sacrificing Brimstone's smokes to gain control of the vertical map. The curious thing about this tournament is that, within the games analyzed, no team the Breach, Brimstone, Cypher, Sage, and Sova composition, the most common components in the Meta Report #2.

At the Solary Cup, the variability we saw at the Mandatory Cup stabilized a little bit. We see again Breach, Brimstone, Cypher, Sage, and Sova as the leading composition. Prodigy returned to this composition after trying Raze at the Mandatory Cup. In the second place, we have Breach, Brimstone, Cypher, Raze, and Sage, which continues to set the trend in Europe. It is the most used composition by Fish123 (with modifications on Haven changing Brimstone to Jett), and they’re getting excellent results with it. In the third place, we have Breach, Cypher, Sova, Omen, and Sage. The team that mainly used this is HypHypHyp, although Prodigy also used it once.

The core that we have been seeing is still there, Breach, Brimstone, Cypher and Sage occupy more than 70% of compositions. The composition pick rates are similar to the Solary Cup, and novelty is found in the third most used composition: Breach, Cypher, Jett, Omen, and Sage was used several times by Code 7 (a team that reached the final of this tournament). 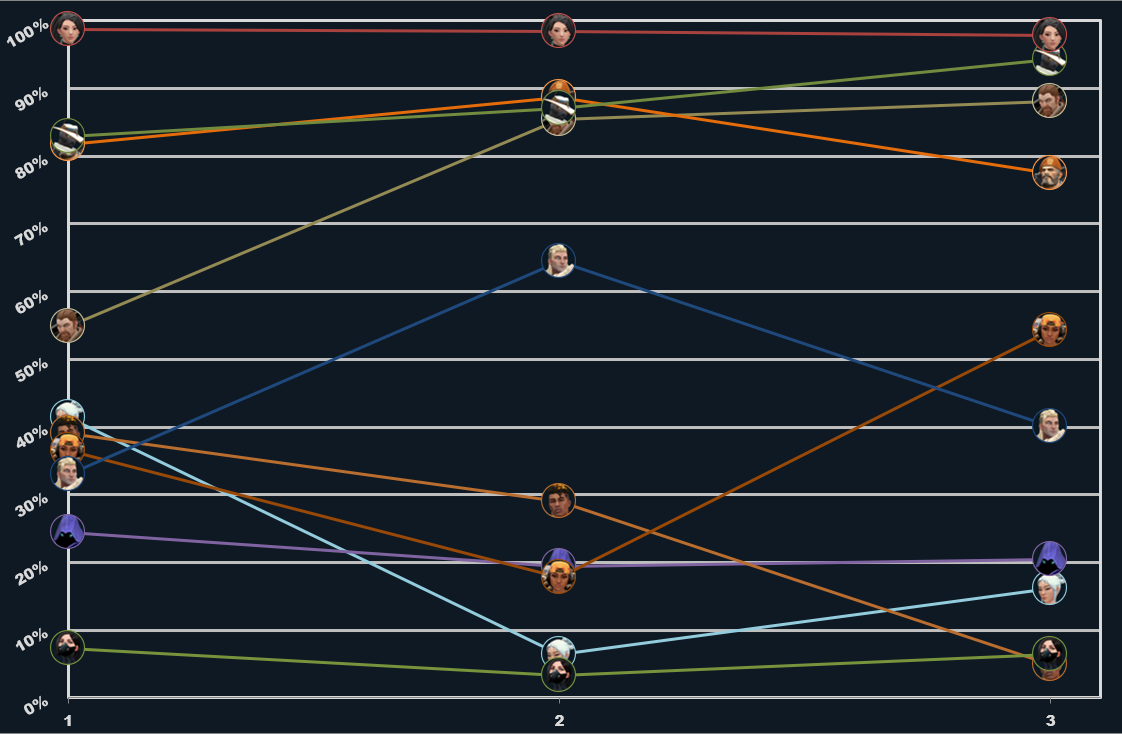 It is interesting to see the evolution of the use of Agents over time. Sage has always held a high pick rate despite the nerfs that she suffered (Patch 0.50). Cypher and Breach were consolidating their position over time, especially Breach. Brimstone seemed a must the first few weeks, and now the teams are finding ways to play with other Agents, depending on the map. Sova and Raze are competing for that fifth slot in teams. Jett was very popular when the game was launched, but over time the teams opted for characters with abilities focused on helping the team. Phoenix, Omen and Viper seem not to be finding their place: Viper appears on Bind in certain teams, Omen is an option for teams that decide to sacrifice Brimstone but keep some form of vision blocking, and Phoenix's pick rate in this report was low and teams decided to replace him on Haven with other compositions (Haven is usually where Phoenix had highest pick rate). 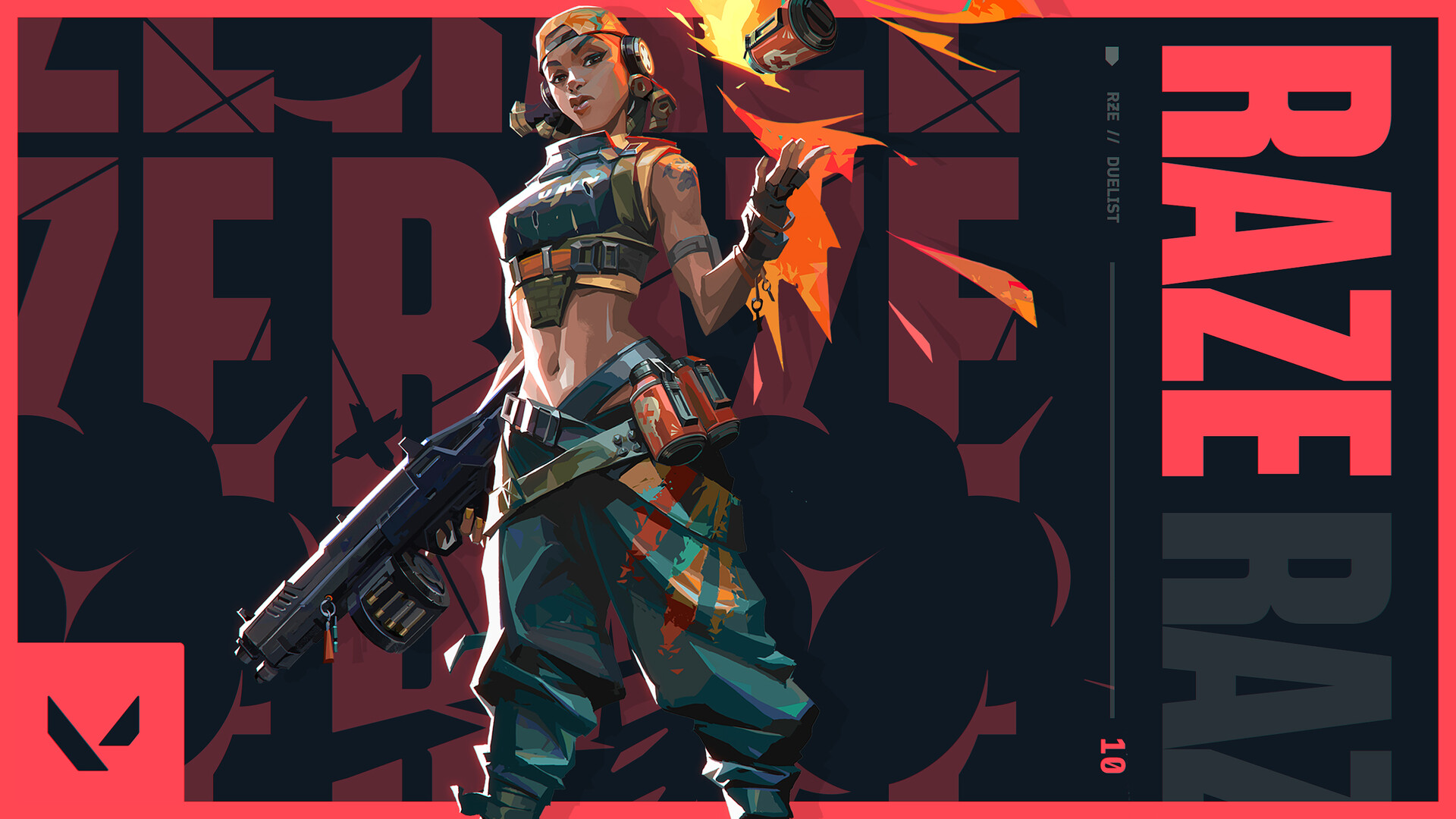 To close this report and understand a little more about the advantages of Raze, we interviewed Dom “soulcas” Sulcas, the Raze player for Fish123 - a team with the best results in Europe at the moment.

What do you think of the current meta?

I think that the meta is fairly stable right now, but there are quite a few interesting comps that you see from time to time that have unique strengths.

From the teams we've played against in scrims and tournaments, I believe there is quite a variety that we play against. However, they usually have weak points that can be exploited easily.

Do you think Sage, Breach and Cypher are a must today? Do you think any of these are much stronger than the rest?

I think that these 3 agents are a must-have in any comp. Sage provides very strong control of areas of the map and has a resurrection and a heal, Breach is the strongest character to have for executes, and Cypher is one of the strongest anchors if not dealt with correctly; and also can provide very strong info. These are the top 3 agents in VALORANT.

There's been a lot of talk about Raze and Jett's abilities being selfish. What do you think Raze and Jett can add to the team?

Raze can be extremely useful if played correctly, her bot can be used multiple ways and is one of her strongest abilities I believe as it can provide important information or can be used for entering a site.

Jett's abilities only directly benefit herself, however, Jett can be a seriously strong champ when used on an aggressive AWPer as it gives you a free get out of jail card with her dash ability when going for very aggressive picks. Her ultimate is very strong on eco rounds and for playing after plant as the attacking side.

Do you expect a lot of changes with the official release?

I hope there are a lot of changes to agents with the official release. The main two changes I hope to see are nerfs to Breach and Sova.

Breach's ult is way too strong when hit by it, it feels a little too long and it is almost a guaranteed death. I also hope to see a nerf on Sova as his drone is way too strong because it takes like 4-5 bullets to kill which allows teams to contact in with it, and also, once tagged by the drone, the duration you are tagged for and alerted to the enemy team is a bit ridiculous and needs to be reduced.

The first stage of VALORANT concludes. On June 2nd everything can change, a new map and a new agent will determine the new territories where the teams will have to adapt. It seems difficult to see a future without Breach, Cypher and Sage at the head, but only with the passage of time, we will know where the game will point.