With the launch of the Ignition series, the world of VALORANT esports takes the next step. In this report, a total of 110 maps were analyzed:

Some tournaments still have formats that are not totally competitive; the G2 Esports Invitational had captains, and players were assigned to teams the day before the tournament started. In spite of this, the general level of the players who participated was very high, and although some synergy was sacrificed between the teams, it opened the possibility to see less traditional compositions. As the tournaments adapt to more competitive formats, using previously assembled teams and having open qualifying slots, we will see the data be more representative of the competitive scene. 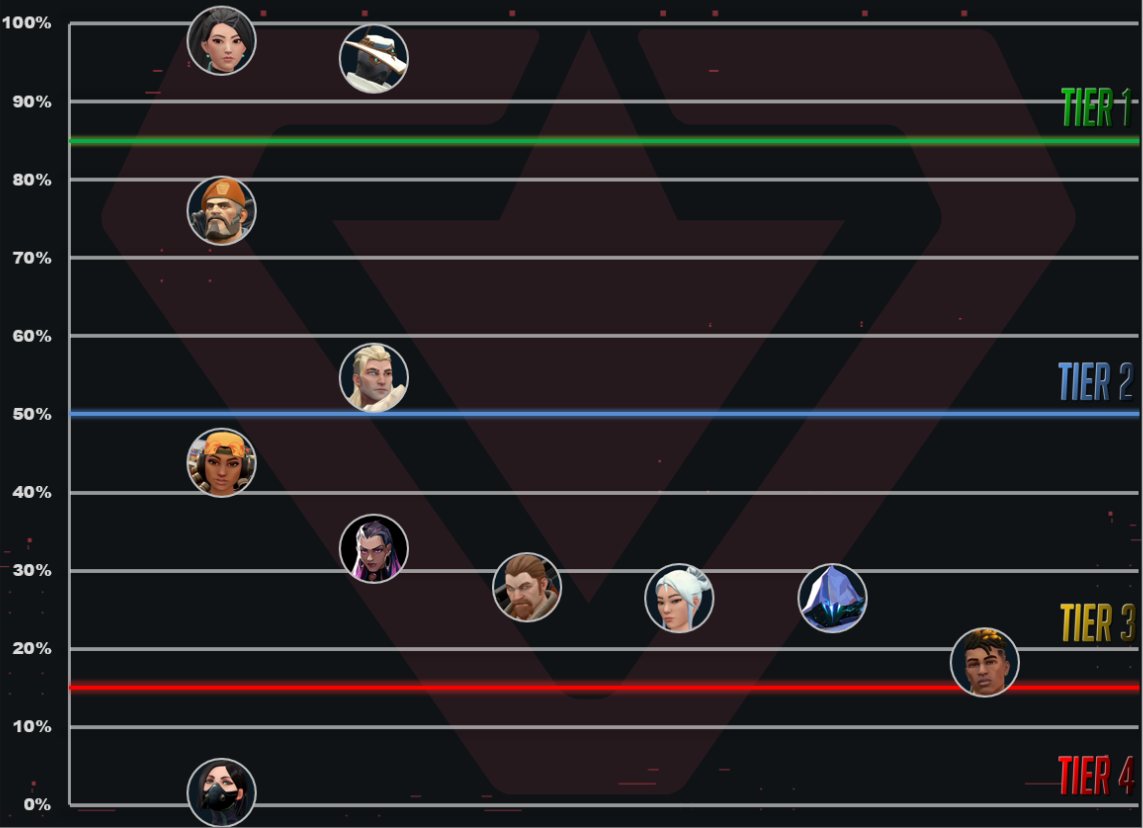 The nerfs in the last patches didn't affect Sage's (98%) pick rate. In this edition, Cypher (95%) joined Tier 1 again and proved to be one of the new favorites for the most teams.

Brimstone (76%) leads Tier 2. Several teams are trying other Agents in his slot, especially on Ascent. Sova (55%) maintains a similar pick rate to the last report, the difference in this report is that he is the fourth most used Agent, unlike past reports where he was fighting for the fifth slot.

Raze (44%) remains a strong and recurring option. Reyna (33%) fell from Meta Report #4, although her fall was not as steep as some expected, Reyna seems to have found her place on Ascent. Breach (28%) remained the same as the last report. Jett (26%) continues to consolidate her place as the team's sniper, although her current pick rate may be a little inflated by the tournament format. Omen (26%) is an interesting case, he has slight growth, but the changes he received are slowly starting to have an impact. Phoenix (18%) was mainly picked by ocelote, who used him in every match on Draken's team, who reached the final of the G2 Esports Invitational.

Viper (1%) is still stuck in this tier, in the 1.02 patch she received some changes that might help her to get out of this tier. It should be noted that Mixwell uses her on Bind on a regular basis, with excellent results.

Let's see the pick rate of the agents by the map:

We can also analyze how the pick rates were per tournament

In general terms, there were no major disparities between the tournaments. It should be noted that some percentage of differences are given by the number of games in each of the tournaments. The most interesting thing to see is how Breach maintains a high percentage of pick rate in the Epulze Valorant Prodigies, a tournament with premade teams instead of showmatch squads. Omen's high pick rate in Take the Throne comes from HypHypHyp, who use Omen regularly.

Analyzing the most popular compositions of these tournaments we have:

We are starting to see that some teams are structured around certain compositions. Breach, Brimstone, Cypher, Raze, and Sage was used by multiple teams, but the last four compositions correspond to teams using the same composition. We also see quite a lot of Breach in these formations, something that is not repeated in every tournament.

Cypher and Sage were present in the top 4 compositions, the only composition that breaks this trend was the one used by Team Izak. Team Mixwell used Cypher, Jett, Omen, Sage, and Sova during the whole tournament in every map; they adapted their composition to the players they had, like Charles “CREA” Beauvois, who is a great Omen player. Brimstone, Cypher, Raze, Sage, and Sova were used mainly by Team Taimou who reached the semifinals.

For the tournaments with less people I will describe what each team used.

If we consider the general pick rate of every tournament we have:

It is not surprising to see Brimstone, Cypher, and Sage in the top of compositions, the surprise is on the side of Breach, who, despite having a low pick rate, when teams use it, they agree on the composition to include it, remaining in the second most used composition. 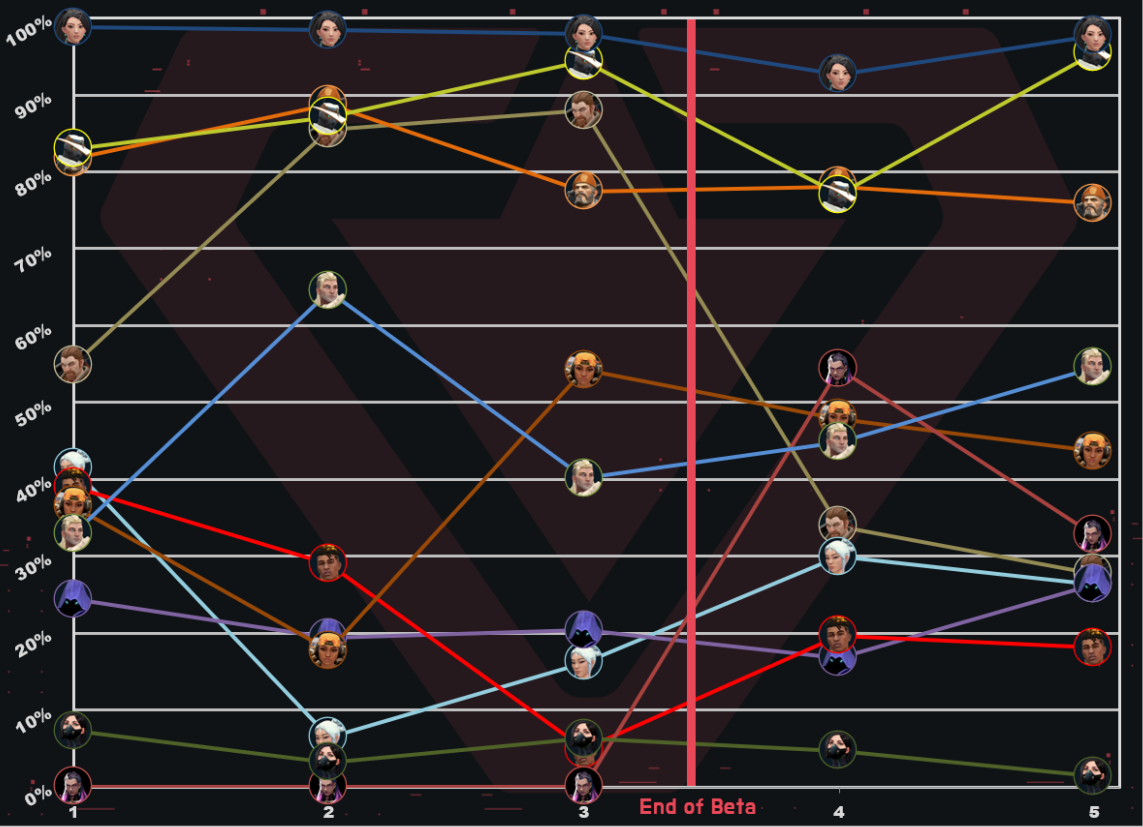 Sage and Cypher consolidate this week, making up for lost space during the Twitch Rivals event. Brimstone seems to have found a balance, although, with Omen's growth, it is possible that Brimstone will continue to lose space in the meta, particularly if the teams start playing more Ascent. Sova and Raze remain at similar levels as in the previous report. Reyna is losing some space, but seems to have found her place on Ascent. Breach is one of the big losers in these last weeks, even though he is present in the second most used composition, Breach, Brimstone, Cypher, Raze, and Sage. We will have to see how it evolves in the next events that include teams that don't set up for a specific event. Phoenix kept his pick rate due to the preference of some players, like ocelote, and for being present in the compositions of Team SoloMid. Viper received some buffs in patch 1.02, we'll see if that makes his pick rate increase. 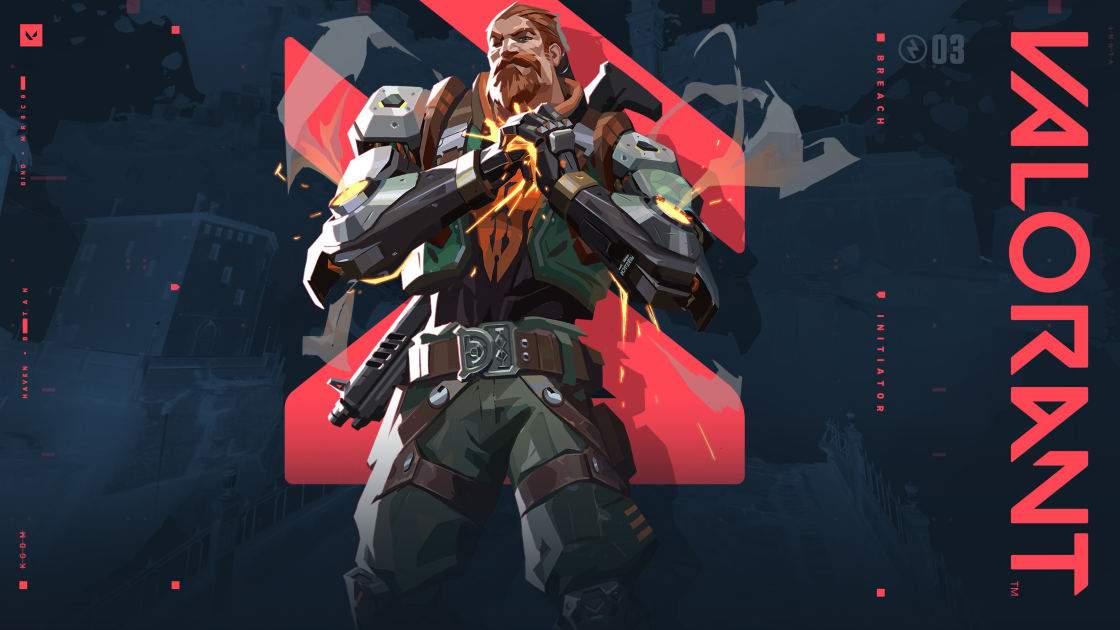 To close out VALORANT Meta Report #5, we had an interview with Adam “ec1s” Eccles, a player for fish123 and a finalist in the G2 Esports Invitational.

What do you think of the current meta?

The current meta right now is still evolving, I don’t believe people have found the best composition and play styles for the maps yet as it’s still so early with many combinations, but I believe right now Sage and Cypher are still must picks and Omen is currently a lot better than Brimstone.

Do you expect any changes soon?

I’m always expecting a change in the meta and that’s something as an IGL I need to consider because there is always an improvement we can make and I need to be very open-minded about it.

I kind of like there is limited variety right now as it makes it easier to play against, as you know what to expect from these characters, but if you change up the comp completely it’s harder to come up with counters and to be able to adapt on the spot. I expect once they have balanced all of the agents there will be a lot more variety.

Tournaments like Twitch Rivals and the G2 Invitational usually have changes in the meta, much less Breach and more Jett or Reyna. What do you think about those?

As for tournaments like G2 and Twitch Rivals, you have players who don’t play the game competitively everyday, so they are less familiar on the meta and will be comfortable on less meta champs. For example, Carlos was using Phoenix in our comp, but in the meta he is not used at all, this brings in a dynamic of having someone comfortable on a champ or forcing him to play something new that he is not familiar with for the sake of a comp. This decision brings in more variety for these types of tournaments.

Related to the previous question, in the G2 Invitational you had to play with Sage, was it to better close the team's compositions?

Yeah, I had to play Sage for the first time as it made sense for the comp and we didn’t have any Sage mains, so I thought I’d be able to play it, as she is a must pick agent right now it would be unwise to play without her.

What do you expect from the Ignition Series?

I’m not sure what I expect from the Ignition Series. I thought it would be based on teams and esports, however, the first event was more of an influencer one, so we can see what it's like in the future! Hoping it’s good for the esports scene.

With the launch of the Ignition series, the world of VALORANT esports begins to take shape. As the weeks go by, we will start to see a lot more of events. The T1 x NSG Showdown is a great example; with invited teams, but with slots for teams that make their way through qualifiers. Until we see a more unified scene, we will have variations in some picks, it will be a matter of waiting to see which are the Agents that are consolidated

DT_RAW
my man phoenix needs a buff... only viper is played less and she just got buffs.