Riot Games on the state of hit registration and future improvements

In any shooter title, whether it is tactical or run-and-gun, hit registration is one of the most important aspects that need constant care and attention from the developer. Riot Games’ latest blog post took a deep dive into how the studio handles hit registration with VALORANT and the development process that goes into it.

The first topic they focused on was raising awareness on the difference between clarity and correctness when it comes to hit registration. The studio admitted there was a spike in reports following the beta patch 0.50, but the majority of them had issues with showing where the hit actually was rather than registering on the correct body part.. When using the term correctness, it refers to the outcome of a shot being wrong, while clarity refers to the presentation of a shot being hard to read.

The blog continued to clarify what happens once you left-click on the enemy’s head when they come out of the corner. The hit registration flow diagram below shows how your input is processed through the server and VALORANT to show the correct shot result and impact VFX, alongside the associated damage with the struck body part. This is where Riot Games are trying to make sure VALORANT shows its players accurate visual representation of where and when their bullet lands consistently. 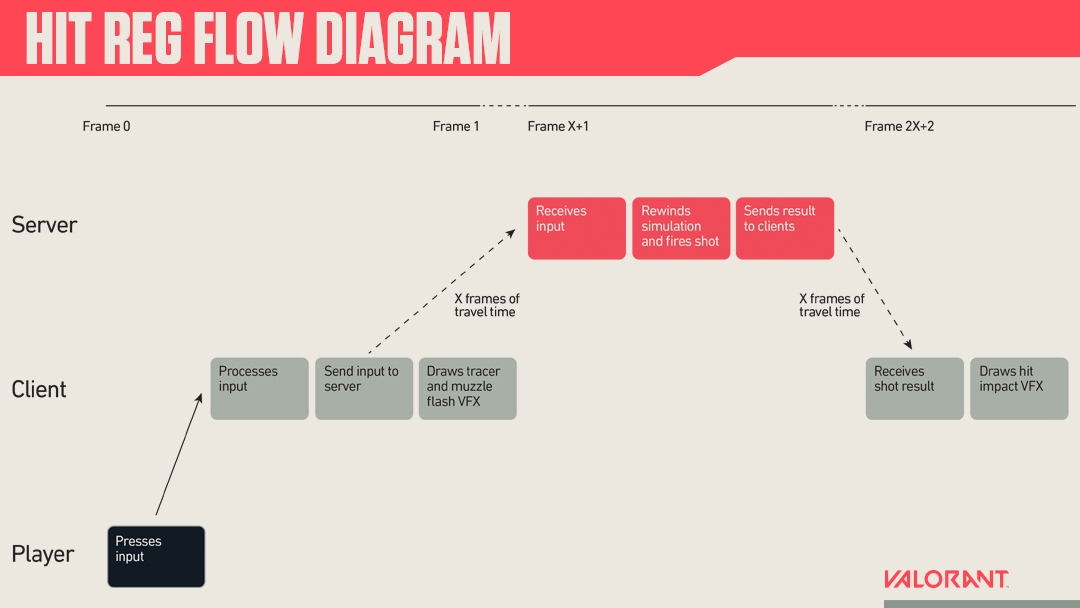 Following a few case studies and detailed examples for the community to better understand the process, Riot Games revealed their plans for upcoming changes and improvements to hit registration. These include adding more visual particles to confirm the shot or give players a more firm indication on where their shot landed. However, the possibility of high-ping players causing contradiction between its registration on the servers and showing in-game for the attacker won’t help as the delay will cause the effect to take place after they go back into the corner and deny their opposition from knowing where exactly they hit them.

“One of the changes we’re iterating on is to have blood and spark effects spawn on the character’s current position, according to which part of their body got hit, and follow them as they move. This greatly increases the clarity in situations like in case study 2 with crouching enemies, because the visual effect will move with their body movements.

One trade-off to this approach is that it would be possible for hit confirm VFX to move behind cover alongside its attached character. Consider the case of a player with 100 ms of ping shooting at a player jiggle peeking a corner. If they land a shot on the enemy and they immediately move back behind a corner before the hit confirm arrives from the server, the shooter may not be able to see the hit confirm when it spawns.

We’ve considered adding multiple particles, some that follow the character and others that spawn immediately at the hit location, based on the client simulation, to mitigate this issue. However, this in turn can cause confusion if the client and server simulations ever disagree on the outcome of a shot: The effects need to be clear in what they represent so it’s easy to understand the outcome of a shot.” said Kevin Lee, a software engineer on VALORANT’s Game Systems team.

What do you think of the current state of hit registration in VALORANT? Let us know your thoughts in the comments section down below!