"We couldn't practice for an entire month": YaBoiDre on 100 Thieves woes and new success with Luminosity

Team:Luminosity GamingMaps Played:170KPR:0.83ADR:157.2 has to have one of the most unique stories in VALORANT right now. He went from breaking into the scene from a more obscure esport, to signing with one of the biggest organizations in the world, to getting dropped and having to rebuild from the ground up. But it seems he has finally begun to find big success under the banner of Luminosity Gaming Luminosity Gaming

Spencer "Hiko" MartinNicholas "nitr0" CannellaJoshua "steel" NissanPeter "Asuna" MazurykEthan "Ethan" Arnold, his thoughts on how pro players should view the game once in the server, and the preparation, or lack thereof, that went into Luminosity’s big win.

Answers have been edited for clarity and grammar. 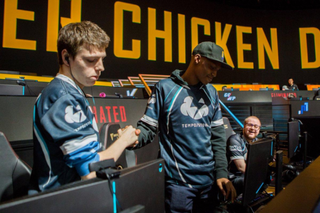 While the NSG Winter Championship marks the first big win for Luminosity, it’s also the first time YaBoiDre, after playing with four different squads, has won a VALORANT event. He’s happy to have won and happy to have shown what his new team can do.

“It feels pretty good to win for sure. When I came on to the scene, I had a lot of confidence in our roster, like I knew this would be one of the rosters I could go far with. It feels good to prove that right away, and prove to myself, and everyone on my team, that we can do that right away.”

Team:Luminosity GamingMaps Played:196KPR:0.85ADR:148.05, usually the sentinel player, went with Raze, and YaBoiDre found himself on Omen. As he describes it, their decision was made last-minute and on-the-fly, but then again, so was most of how they played that event.

“Mainly we went with this because aproto wasn’t feeling comfortable on sentinel on that map, and we decided that that map wasn’t really like the others, and that we didn’t really need a sentinel. At first he was playing Killjoy, but the same matchday, he was like, ‘Guys, I don’t really like playing sentinel, can I play Raze?’ and we were just down for it.”

As for thief’s Jett: “That’s just because that map is really good for Jett, like there’s a lot of elevation and a lot of things you can do with her.”

Finally, with Luminosity established as a top contender for the upcoming VALORANT Champions Tour events, YaBoiDre knows the team’s strategy is not quite up to par, but feels their individual skill helps make up for it.

“I think right now, our biggest strength is our individual skill, to be honest. Since we’ve won a tournament with a very new roster, we didn’t really have a lot of strategy, mainly it was just our individual skill and a bit of teamwork. As the tournament went on, we gained a bit more teamwork, and yeah. Right now I guess it’s not really our strategy or anything like that that makes us win, it’s pretty much the way we work together and then the way we can make individual plays when we need it.”

YaBoiDre comes from a background in PLAYERUNKNOWN’s Battlegrounds, an esport that once looked to have promise but has seriously stagnated in recent times. As YaBoiDre describes it, he wasn’t happy in PUBG, and so when VALORANT was revealed, he began preparing ahead of time.

“Basically, a year before VALORANT came out, I was still playing PUBG, but I wasn’t feeling it at all, and so after the PUBG Pro League, I decided to retire, and when this game got revealed, I just knew that this was a game for me. I started grinding a lot of Counter-Strike and just trying to get better with tactical shooter mechanics, and by the time this game came out, I was just ready to grind and go pro.”

Much discussion, especially in the earlier months of VALORANT, centered around how much of an advantage a background in Counter-Strike gave a player. This was also often noted as something that might have gone wrong with 100 Thieves. However, YaBoiDre doesn’t really feel he was a step behind at all.

If there was anything his PUBG background helped him get used to in his new game, YaBoiDre says it’s the amount of tournaments he got used to playing.

Team:100 ThievesMaps Played:116KPR:0.72ADR:132.85 and represent the organization. Initial results were okay, but the team’s performance soon dropped off massively, and 100 Thieves would only score a few more wins before the team, apart from Hiko, was released. Many ideas have been given for what went wrong: struggles to transition from PUBG to VALORANT, major internet issues that were hampering Hiko, not having the full roster practicing in one place, etc. YaBoiDre’s perspective is that the internet problems, and having to drop Jaden "Vegas" James Jaden "Vegas" James

Team:Maps Played:0KPR:0.55ADR:100.01, who had been the fifth member of their orgless team, were the most prevalent issues.

“Mainly, removing a player affects the roster more than most people would think, and with the internet problems, we couldn’t practice at all for an entire month, an entire month we weren’t practicing, so that really made us fall behind a lot compared to the other teams.”

When asked if having Vegas would have helped the team, he replied, “Yeah, we would have done better with Vegas in my opinion, 100%.”

After being dropped unceremoniously from 100 Thieves, three of those PUBG players, Venerated, Pride, and Vegas, would leave the VALORANT scene altogether. In a recent piece for Nerd Street Gamers, YaBoiDre is even quoted as saying that “After 100 Thieves decided to cut us, I didn’t know what to do. I was like, ‘Wow, this is really s—ty, I might just not want to play this game anymore.’ It felt like my reputation was ruined after that, a lot of the fans hated me for some reason.” But, after all that, he decided to stick it out. Obviously, the decision has paid off big-time, and he says that he did it mainly because he was still having a lot of fun with the game.

“I mainly stayed around because, even though all the s—ty stuff happened, I still really enjoyed the game, and I had a couple friends that still played and motivated me to play as well.”

As for the whereabouts of Pride, a player many fans have pointed out they’d have liked to see more of: “I think right now, he’s going to school, like I think he still plays games, like Rust, but he hasn’t played VALORANT in a long time I don’t think. He’s focusing on college right now.”

When it comes to international competition, YaBoiDre is comfortable saying that regions globally are competitive with each other.

“I do watch a bit of international play, I think it’s pretty close honestly, like NA compared to EU. I think EU has a much looser style, but I feel like the teams, on any given day in this game, any team can beat anyone, I don’t really think any region is that far ahead of anyone, and if there was an international tournament, the results would be very mixed, and there would be some EU teams winning and some NA teams winning. It wouldn’t be a complete blowout for any region yet.”

However, when asked about facing specific players, at home and internationally, he took a different approach to the question than others have.

“I don’t really think about my opponents too much, there’s not anyone I watch where I’m like ‘OMG, I want to play that guy’. I just try to focus on myself, really, and try to focus on my team. I think that’s what matters to me.”

“When you’re playing, you’re not thinking about who you’re going up against, or at least you shouldn’t be in my opinion. I don’t think I’ve ever thought mid-match, ‘OMG, this guy is s—ting on me’, I don’t think about that at all. I just try to focus on what went wrong in the round and ‘what can we do better’. And when you have a really talented team individually, it’s already hard enough for people on the other team to solo stomp you, it just really won’t happen when everyone on your team is that talented. No one’s going to have a free farm on you, I don’t feel. That’s how it felt for me in the tournament, it didn’t feel like any individual player was just dominating us, it didn’t really feel like that.”

Finally, in regards to the future of Luminosity, YaBoiDre believes things are looking very bright. After winning an event with little to no preparation against one of the best teams in North America, he thinks success can come again and with consistency.

“I think we showed a really strong performance, especially since we had no strats at all, we were just going on the fly with it. Like nothing was planned, so the fact that we were able to do that well and almost 3-0 them should show a lot for people. And I think the players on my team are that talented, so as long as we don’t get complacent and keep grinding it out, we’ll repeat that for sure, and we’ll be known as a top 5 team within the next few months.”

element705
Was Hiko having internet problems something that was reported back then? I'm surprised to hear they didn't practice for a month because of net issues when I feel like I was seeing Hiko streaming most days during that period.
2021-01-25 16:59
darthhippo
His stream was crashing almost constantly for an entire month. It was definitely reported. I remember during the FaZe Invitational they had to delay their first match because his internet cut out and he had to go to a spot in Detroit hooked up by 100T to play. It got so bad he ended up purchasing a business line with Comcast but even that had its problems for a few weeks. So yeah, definitely reported on and talked about.
2021-01-26 10:00