After a very tough week in Berlin, it is now time to decide the winner of VCT GC 2022 - Championship. G2 Gozen and Shopify Rebellion Female are going to compete against each other to lift the trophy and so far both teams had impressive performances. Here is everything you need to know about the grand final!

G2 Gozen won the previous Game Changer tournaments and they are currently the most successful team in the world, among other teams in the field. Despite dominating every tournament they have competed in so far, G2 Gozen lost the EMEA trophy after a heartbreaking loss against Guild X. However, the organization rose to the top once again and reached the grand final of this year’s Game Changer Championship, while Guild X had already been eliminated in the previous stages. Now, it is time for their toughest match this year. Michaela "mimi" Lintrup is currently the rating leader of the tournament stepping up with a solid 1.41 rating in 7 maps. The Danish player surely made a difference for his team, playing Sage and KAY/O throughout the tournament. Mimi picked Sage two times and KAY/O five times. The Danish player’s rating with Sage is 1.59 on two maps and Mimi holds a 1.34 rating on KAY/O. Apart from the Danish star, Anastasia "Glance" Anisimova holds the second-best rating on the team, 1.16. the Russian player is responsible for smoker agents, such as Viper, Brimstone, Astra, and Omen.

The other grand finalists of the tournament, Shopify Rebellion Female never really had a chance to show their true potential regionally. Cloud9 White dominated the North American scene this year and Shopify's best performance against them was winning seven rounds at the NA Grand Final match. However, Shopify Rebellion’s true potential came to the light here in Berlin. The NA representatives lost to Team Liquid Brazil in the Upper Bracker Semi Final matchup but managed to guide their way to the grand finals by eliminating X10 Sapphire and Cloud9 White in the lower bracket. Just like mimi on G2 Gozen, Shopify Rebellion Female’s best-performing player is also a Sage and KAY/O player, Lorrian "Lorri" Elad. Lorri also played an extra four maps of Skye. The North American currently holds a 1.21 rating in 13 maps. Elad is the most powerful weapon Shopify could use in this matchup and their rivalry with mimi will be at the highest level for sure. 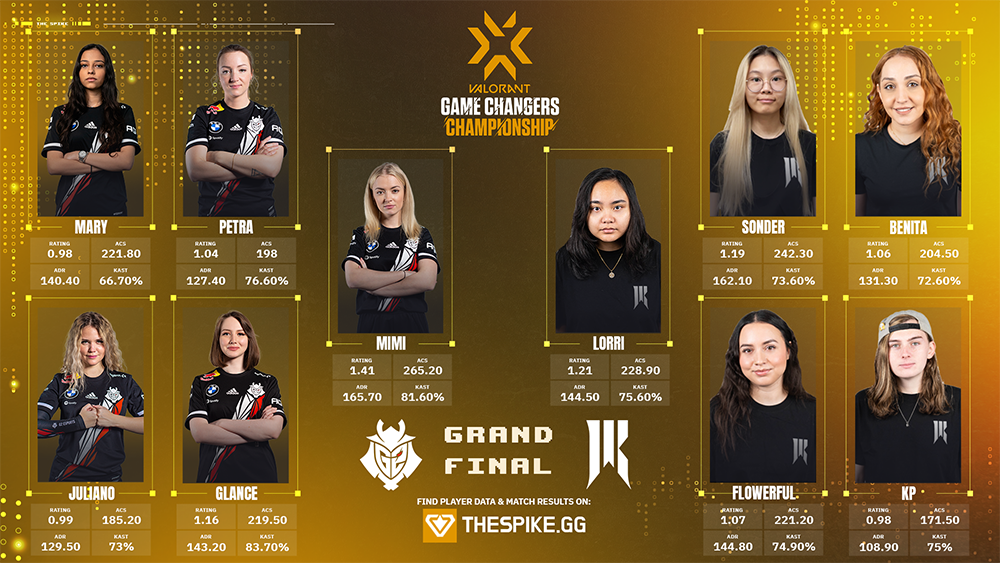