Multiple organizations worldwide have teamed up with Riot Games to hold VALORANT tournaments throughout the off-season. One of these organizations, Skyesports partnered with Riot to bring the VCT 2022 OFF SEASON - Skyesports SEA Championship - Main Event, with a total prize pool of $30,000. Lastly, four teams made their way from qualifiers to the top and now the playoffs are at the door, featuring Velocity Gaming, GodSquad, MiTH, and Bleed eSports.

MiTH and Bleed eSports competed at the SEA Qualifier. While Bleed picked up four wins, MiTH grabbed three. Both teams played against each other in the playoff stage and MiTH managed to upset their opponents to reach the grand final. Bleed players battled their way from the lower bracket and secured their place at the main event. Velocity and GodSquad were the first two seeded teams at India Qualifiers, both picking up two wins. 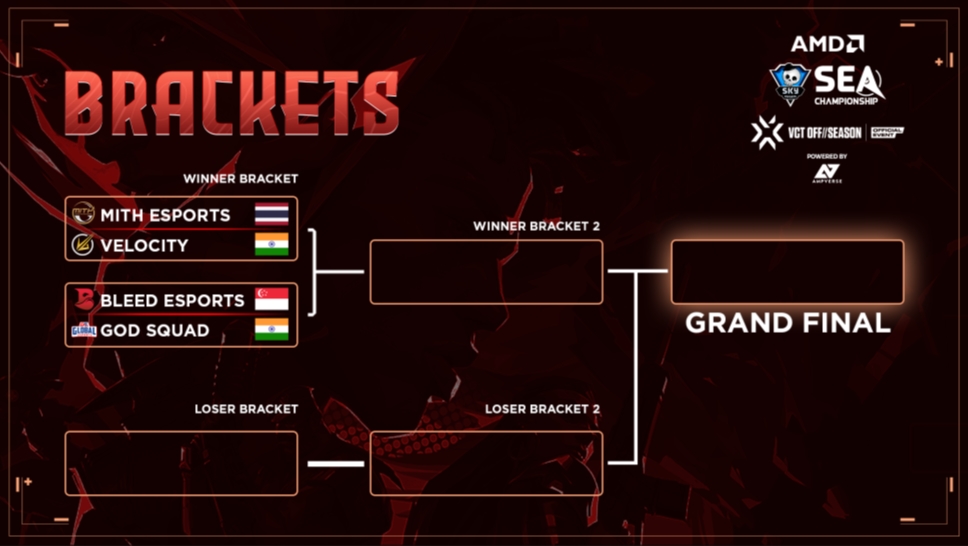 Tournament bracket. Credit: Skyesports
To ensure an even playing field between the SEA and Indian teams, Skyesports will be flying the two Indian teams out to Bangkok, Thailand to compete in the Skyesports SEA Championship Playoffs. They will be playing from a fully-equipped bootcamp. Bleed Esports and MiTH, on the other hand, will play remotely. Fans can catch the high-octane action on Skyesports’ YouTube and Twitch channels in English, Hindi, and Thai. The four teams will be locking horns in a double-elimination bracket from Nov. 23 to 25 to decide the champion.

Commenting on the Skyesports SEA Championship - VALORANT, Shiva Nandy, the founder, and CEO of Skyesports, said, *“Our decision to fly Indian teams out to Thailand to eliminate ping differences is true to our commitment to ensure top-notch and fair action for fans to enjoy. Teams from both regions will benefit immensely from the international exposure. The Afterparty is an added glamor to this event offering a unique intersection of SEA and South Asian gaming stars as we look to host more cross-regional tournaments in the future.”*

Teams to represent their nations at Skyesports SEA Championship Playoffs are: