The Different Classes in VALORANT

As we get to know all the Agents in VALORANT, many players are realizing some characters just aren’t designed for certain situations. The thing is, Riot Games actually designed VALORANT to be like that. Each character is held within a set class in which the dev team designed them to function at their peak in-game. As opposed to competitive roles that are vital for any team, Classes help define the characters and give us a deeper understanding of how to use their abilities. This is an in depth explanation of the classes and how they can work together to create the VALORANT experience.

As you can imagine, the Duelist class is meant for the flashier characters in the game. Players who play this class are meant to be the first to push into a fight. That being said, the characters within this class are given the equipment needed to peek around corners as well as gain an advantage when taking those early round fights. This class includes Phoenix, Jett, Raze, and the new character Reyna. Every one of these characters have their own unique way to take on gunfights. A couple of examples include Phoenix’s Curveball or Raze’s Blast Pack; each ability gives those characters a unique way to gain an advantage. This all being said, having four duelist characters on your team is not likely to be successful as they end up working against each other. This is due to the fact that their abilities could be seen as selfish, but a better way of putting it is that they are characters who depend on Sentinel characters to fall back on after pushing into a fight.

The dictionary definition of the word Sentinel is “a soldier or guard whose job is to stand and keep watch.” Riot Games did a great job at creating the Sentinel class to fit that description. These characters could be seen as the main support characters in the game, as their kits are equipped to provide information and health to their teammates. In this class, we have Sage and Cypher so far, and they are able to provide so much for their team. Sage is the only healer in the game currently, so her ability to live throughout the round is vital for her team’s success. With her ultimate, she can also make some pretty massive plays to clutch out a round by resurrecting a fallen teammate. Cypher has the ability to cover the flanking routes of enemies by setting up traps. He is also a great intel gatherer with his ultimate, as he can locate the enemies positions on the map. What’s nice about these characters, is that they are designed specifically for team play. These Agents aren’t meant to be played as lone wolves, so it forces players to think about their actions going into a gunfight. 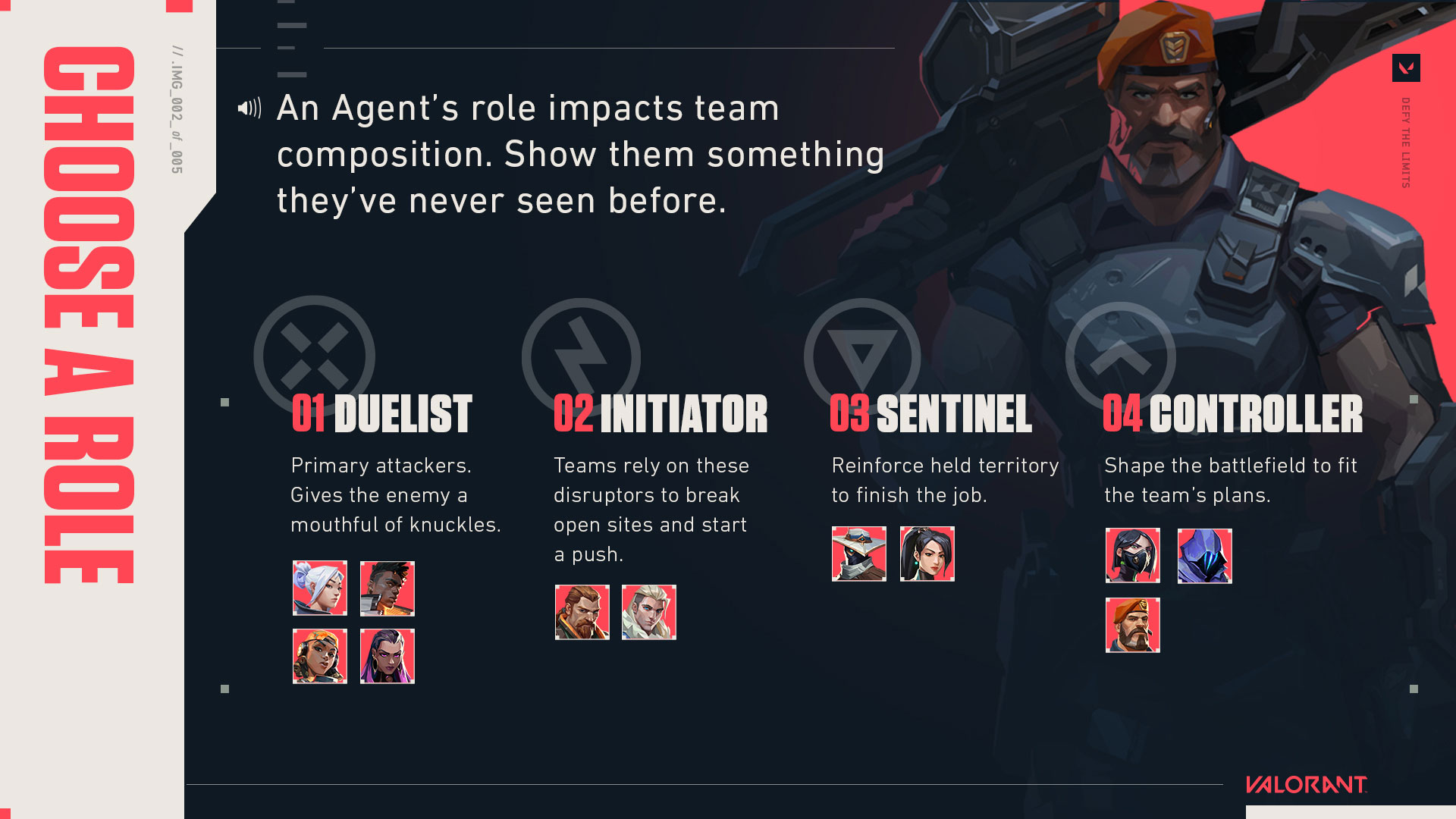 The Controller class is true to its name, in that each of these characters are extremely good at area denial as well as setting the pace of the enemy team. From the beginning of each game players who run the Controller class characters are given plenty of utility so that they can help guide their teammates to success. Players who main this class should have extreme map awareness so that they can cut off choke points and force the enemy team to approach every situation with extreme caution. Brimstone, Viper, and Omen share this class as they are all able to take control of the battlefield in the matter of a few seconds. Take Viper’s ultimate ability “Viper’s Pit”. This massive cloud of toxic gas allows her to take over whole areas by herself alone while also forcing enemies to take risky gunfights with her team. Brimstone’s Orbital Strike is another great area denial tool to clear out enemies that could be in advantageous positions after a Spike plant. All these abilities culminate to create the perfect Agents to be able to form game-winning plays for their team.

Last, but certainly not the least, we have the Initiator class. This class is made to set their teammates up for success when entering into a gunfight. Breach and Sova are the champions of this class, due to the fact that they are able to do so much with their kits to make the lives of their teammates easier. Sova and his Recon Bolts give intel on enemy positions so that the team knows where they need to pre-aim when peeking around corners. Breach on the other hand has the unique ability to flash the enemy through walls, which is extremely valuable as other players on Breach’s team push up a lane or into a site. But we have to remember that as with each one of these classes, the Initiator class depends heavily on teamplay to be successful. The initiator sets up winnable fights for their teammates, but their teammates' abilities can work in synergy quite well with both Breach and Sova.

The biggest lesson throughout this article is that each Agent cannot depend solely on themselves to win a game. High level team play with a variety of characters is needed to gain the advantage in a match. Sova, Viper, and even Jett cannot depend on themselves alone to win every round. This is the beauty of Riot Games’ design philosophy with VALORANT. This game is meant to be the peak of competitive 5v5 gameplay, so the synergy between each Agent shows us the forethought that the dev team put in when creating each character. Hopefully, you are more well equipped as you try to rank up through VALORANT.